The Young and the Restless Spoilers: Kyle’s Past with Victor Comes Back to Haunt Him – Schemer Sparks Abbott Chaos, Newman Trouble

BY Heather Hughes on September 17, 2018 | Comments: one comment
Related : Soap Opera, Spoiler, Television, The Young and the Restless 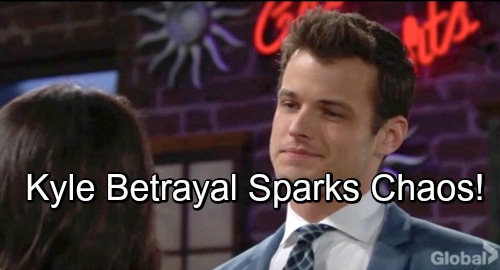 The Young and the Restless (Y&R) spoilers tease that Kyle’s (Michael Mealor) past will come back to haunt him. He’s made some moves that he’ll end up regretting over the next couple weeks. Of course, Kyle’s not done yet. He’ll undoubtedly make even more ill-advised decisions before it’s all said and done.

Deep down, Kyle’s a real sweetheart of a guy. He can be smug and sarcastic at times, but he’d do anything for the people he cares about. When Mariah (Camryn Grimes) needed a private investigator, Kyle didn’t hesitate to offer up the cash and refuse repayment. Plus, Kyle always does whatever he can to make sure Dina’s (Marla Adams) safe and happy. She clearly means a lot to him.

Kyle even showed some sensitivity by wanting more than just a hookup from Summer (Hunter King). However, there’s a limit to Kyle’s sweetness. He still wants a powerful career and Billy’s (Jason Thompson) standing in the way. Summer’s also been after Billy lately, so maybe that’s fueling Kyle’s desire to destroy him.

The Young and the Restless spoilers say Kyle may take his plot too far. After Kyle’s scheme with Sinead (Lira Kellerman) flops, he’ll have to explore other options. Since Kyle’s pal is a gambling shark, he’ll turn to him for help. It sounds like Billy will fall right into Kyle’s trap, but some problems will quickly emerge.

At some point, Kyle’s history with Victor (Eric Braeden) will come into play. Y&R fans will recall how Kyle served as a mole for a while. That storyline eventually fizzled, but Kyle will still regret doing business with the enemy. Perhaps Victor will blackmail Kyle into a favor or use him to hurt Jack (Peter Bergman) somehow.

Sooner or later, Kyle will learn that Jack and Victor (Eric Braeden) might be brothers. As their rivalry heats up, that could bring regrets for Kyle, too. He’ll be caught in quite a mess, which will culminate in several family disasters. Y&R viewers can expect plenty of Jabot chaos, including total terror for Billy.