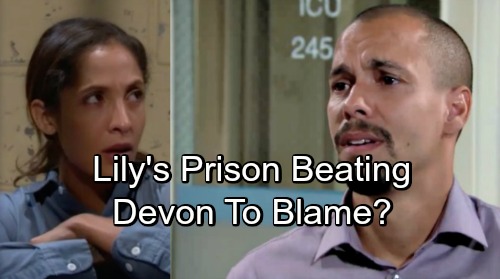 The Young and the Restless (Y&R) spoilers tease that Lily (Christel Khalil) will face a difficult adjustment period. When you consider the fact that she could’ve received 20 years in the slammer, one year seems like nothing. Lily should just thank her lucky stars she wasn’t locked up for two decades.

Nevertheless, that won’t stop Lily and her family from feeling sorry for themselves. Cane (Daniel Goddard) will have a hard time without Lily by his side. He’ll do his best to run the household without her, but it’ll be difficult to manage two teenagers and a baby.

Mattie’s (Lexie Stevenson) got a good head on her shoulders, so she’ll probably be able to cope. Charlie (Noah Alexander Gerry), on the other hand, will act out in unpredictable ways. He’ll miss his mom and battle guilt over her current predicament. That should lead to some bad behavior and his own set of consequences.

The Young and the Restless spoilers say Cane will be overwhelmed, but Lily’s the one who’s really got it rough. We know that Lily’s airtime will be reduced in the coming months, which makes sense with this prison storyline. Christel Khalil is no longer on contract, but she assured fans that she’d remain as a recurring player. She posted a statement on Instagram to fill Y&R viewers in.

Khalil said, “…I’m not leaving, just ready (after 16 amazing years playing Lily) to explore new things! I will continue to be a proud member of the Y&R family and look forward to further adventures playing Lily.” What does that tell us? If Khalil is really sticking around for some scenes here and there, the show will have to find ways to use her in prison.

Family visits are a no-brainer, but there’s a good chance The Young and the Restless will go for something a bit more dramatic. Whenever someone lands in jail, an attack is usually involved. Lily only got 12 months for the deaths of Hilary (Mishael Morgan) and her unborn baby. She could also be viewed as a bit of a princess in there. Lily seems like a prime target for prison bullies.

Will Lily suffer a brutal beating? Could she nearly die and finally earn Devon’s (Bryton James) forgiveness? He might come close to losing Lily as well and see that it’s just not worth it to hold a grudge.