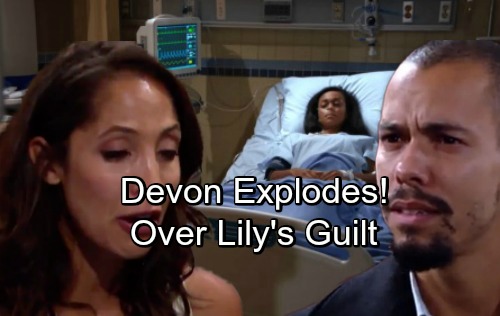 The Young and the Restless (Y&R) spoilers tease that a family war is on the way. At this point, Devon (Bryton James) seems to have accepted that this was just an accident. He’s not happy about Charlie (Noah Alexander Gerry) and Shauna’s (Camryn Hamm) hookup causing a chain reaction, but they couldn’t have predicted the awful fallout.

Hilary (Mishael Morgan) was arguing right along with Lily (Christel Khalil) in the car. The distraction undoubtedly contributed to the crash, but no one meant for any harm to come to Hilary or her baby. Devon won’t want to think about this accident in the coming days anyway. He’ll just work long hours at Hamilton-Winters to keep his mind occupied.

However, everything will change when the whole truth comes out. Devon currently believes a truck came out of nowhere and slammed into Lily’s vehicle. He doesn’t know she ran a red light and put the car in its path. Of course, even Lily herself isn’t in the loop just yet. She’s in for quite a shock when someone exposes her actions.

Y&R spoilers say this bomb will drop in an extremely public way. Let’s consider a few options. Charlie, Shauna and Cane (Daniel Goddard) are the only characters who know the true cause of the crash. Cane realizes the truth would devastate Lily, so we can probably rule him out as the secret spiller.

Charlie wrestled with this initially, but he now seems determined to keep the secret as well. Shauna doesn’t have the same emotional connection to Lily. She may see Devon’s pain and decide to bring everything out in the open. Shauna might use this info to clear her own conscience.

Of course, it’s also possible that none of these people will blab. The cops could ultimately find proof of Lily’s actions and confront her with it. Some new camera footage or eyewitnesses might surface. The investigation could conclude that Lily ran the red light, so the police could deliver the blow.

Whatever the case, The Young and the Restless spoilers say the revelation will cause quite a scene. Since we know a public spectacle’s brewing, this information could come out at Hilary’s funeral. Lily will be horrified when she discovers she’s even more responsible than she thought.

Devon will also hit the roof, so this will kick off a battle like no other. He’ll want Lily to suffer for taking his family away from him. We’ll give you updates as other Young and the Restless news comes in. Stick with Y&R and don’t forget to check CDL often for the latest Young and the Restless spoilers, updates, and news.