The Young and the Restless Spoilers: Mac’s Back for Exploding J.T. Drama – Cover-up Crew Finally Pays the Price 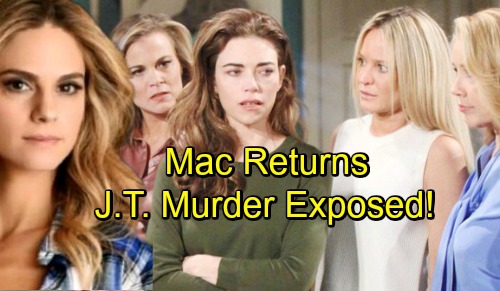 The Young and the Restless (Y&R) spoilers tease that a crucial return’s on the way. According to Soap Opera Digest, Kelly Kruger (Mackenzie aka “Mac”) will make a comeback starting November 6. Kruger herself also brought up her return on social media. She’s eager to slip back in the role of Mac and shake things up in Genoa City.

On Twitter, Kruger posted a fun pic just outside the set. She was all smiles with a script in her hand. Kruger exclaimed, “GUESS WHO’s BACK IN GENOA CITY?! There’s nothing like stepping onto this stage first thing in the morning. I love my @youngandrestlesscbs family so much!”

It’s nice when returning Y&R stars are enthusiastic about their comeback stints. There’s a good chance Mac’s will be a real doozy! Since Nick (Joshua Morrow) and Phyllis’ (Gina Tognoni) cheating news is currently blowing up, it’s just a matter of time until the next big secret’s revealed.

Ever since that fateful night, Y&R fans have been waiting on the truth to come out. November sweeps seems like the perfect time, so it makes since that Mac’s hitting the screen around then. Will she play a role in how it comes out? Could she show up in the aftermath instead?

Either way, Mac needs to be involved here. J.T.’s the father of her kids, so she’ll be furious that all this was kept from her. It’d be great if Reed (Tristan Lake Leabu) could get back in the mix for this, too. He’ll surely want some answers when he learns his father’s dead and buried.

However, The Young and the Restless spoilers say the family drama will get complicated. Reed may blame Victoria and refuse to come home. That’d be an acceptable excuse to leave him off canvas. As for the cover-up crew, will they all go down? Are some stunning trials in the works?

Y&R viewers won’t want to miss the action happening this fall! We’ll give you updates as other details emerge. Stay tuned to the CBS soap and don’t forget to check CDL often for the latest Young and the Restless spoilers, updates, and news.

GUESS WHO’s BACK IN GENOA CITY?! 💃🏼 There’s nothing like stepping onto this stage first thing in the morning. I love my @youngandrestlesscbs family so much! @cbsdaytime @YRInsider #MacsBack #YR #cbs #daytime #worklife pic.twitter.com/Zn4FstFWmj