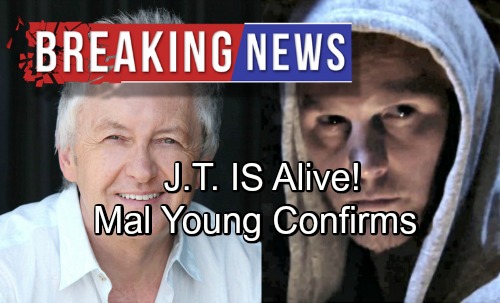 The Young and the Restless (Y&R) spoilers tease that we’ve got some huge news to pass along. When J.T. (Thad Luckinbill) started targeting Victor (Eric Braeden), Y&R fans were left with plenty of questions. Since we seemingly saw the cover-up crew get rid of J.T.’s body, there have certainly been doubts about J.T.’s return from the dead.

A guy in a hoodie glared at Sharon (Sharon Case) and Nikki (Melody Thomas Scott) in the dark, but some viewers weren’t so sure Thad Luckinbill was playing him. Between the shadows and J.T.’s especially menacing expression, it was tough to tell. Everyone wants answers, so what’s the truth?

The Young and the Restless is keeping the details hush-hush, but we have one important piece of the puzzle now. Mal Young, Y&R’s head writer and executive producer, offered confirmation in a new Soap Opera Digest interview. According to Young, Luckinbill is indeed back on the CBS soap.

Of course, Young stopped short of confirming Luckinbill’s role. He didn’t want to weigh in on that since the story’s still unfolding. It’s possible J.T. truly returned from the dead, but it’s also possible Luckibill is playing his own doppelganger. Regardless, Luckinbill’s character will bring major drama to Genoa City.

You might be wondering how Y&R pulled off Luckinbill’s surprise return. This is the kind of news that usually gets released somewhere exclusively. Many websites and soap magazines would’ve jumped at a sneak peek opportunity. Even when daytime dramas try to keep things quiet, set leaks tend to be common.

However, Young indicated that they worked hard to make this a top-secret comeback. “We didn’t shout about it,” Young said. “We just quietly brought him in the back door.” It seems the strategy paid off. Although the story hinted that J.T. had returned, it was still shocking to see Luckinbill’s face peering out of that hoodie. At that moment, fans had to wonder if J.T. was actually alive and out for revenge.