The Young and the Restless Spoilers: Mariah’s Discovery – Tessa Appears To Be A Victim, Huge Surprise In Store For Cover-up Crew

BY Sean O'Brien on December 8, 2018 | Comments: one comment
Related : Soap Opera, Spoiler, Television, The Young and the Restless 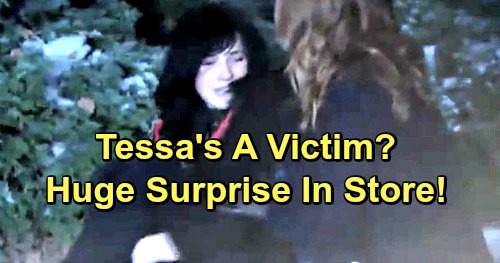 The Young and the Restless spoilers tease that Mariah’s (Camryn Grimes) outrage at the coverup crew’s kidnap of Tessa (Cait Fairbanks) will lead to Miss Copeland shifting her loyalties back to Miss Porter. However, is Tessa the innocent victim that she’s making herself out to be and can all involved in J.T.’s (Thad Luckinbill) accidental murder be trusted?

Assume that everything Tessa has told Mariah in recent weeks is true. Even if that proves to bear out, is this person worth trusting? Considering her history and the sketchy details about Crystal’s (Morgan Obenreder) coyote-aided move to Canada, the answer appears to be maybe.

Tessa was perhaps wrongly kidnapped outside of her cookie-cuter apartment with the 1960’s beads serving as a see-through door to the kitchen’s entrance. She may have been dragged into the woods outside of Genoa City with a black hood over her head like a common criminal. But Nikki (Melody Thomas Scott) and her frenzied cohorts had good reason to suspect this young lady.

Having already blackmailed the coverup crew, Tessa was then fired by Sharon (Sharon Case) as a barista. Y&R viewers took note of the fancy name the owner of Crimson Lights tagged her coffee and snack servers with by the way and weren’t impressed. Titles often serve as covers, as Mariah may soon learn again. Significant other, family, friend? She and the viewers will be provided with the answer to the last question soon.

Losing one’s job weeks before Christmas doesn’t lend itself to being merry. Tessa wasn’t and exacted further revenge by planting a gun at the Newman Ranch stables, set them on fire, and then threw J.T.’s (Thad Luckinbill) bloody shirt into the mix. At least that’s the (ridiculous) theory Nikki, Sharon, and Vickie (Amelia Heinle) believe.

Okay, how would Tessa have dug up J.T.’s body and exacted blood from his corpse? Where would she be keeping said cadaver and what would the endgame be?

Mariah’s double-risk is this; She’s choosing to believe that Tessa was wronged and that her mother, the Newman ladies, and Phyllis (Gina Tognoni), the crew’s self-anointed fixer, won’t treat her (Mariah) in the same manner as they’ve dealt with Tessa. Sure, Sharon likely wouldn’t make any rash moves toward her daughter.

Tessa’s woodsy denial feels real. She likely was just the blackmailer, but isn’t the controller of J.T.’s body, didn’t set the stables ablaze, or plant fake evidence to fame Victor (Eric Braeden) and the Newman family.

Whether the connection Mariah and Tessa had still exists, or can be revived is uncertain. To a lesser extent, the genetic link Mariah has with Sharon will now be tested. That’s what this part of the J.T. storyline’s seeming crescendo means for Grimes’ alter ego at this point in plot time.