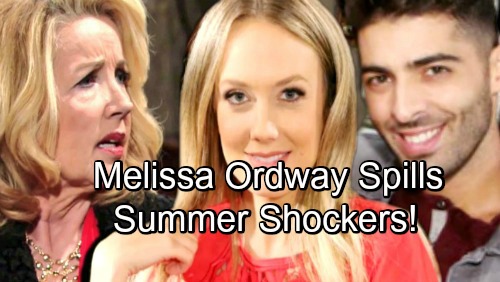 The Young and the Restless (Y&R) spoilers tease that more drama’s in Abby’s (Melissa Ordway) future. Some shockers are coming up and they’re sure to bring fun moments for Y&R fans. In an interview with Soap Central, Melissa Ordway dished on her latest storyline as well as a few others.

First, let’s talk about Abby and Arturo’s (Jason Canela) summer romance. Abby is once again falling for a guy who’s been in love with a relative. Should Abby be wary here? Ordway said, “He was sleeping with her stepmother, and I don’t know that I would go down that path…She has already shared men with her mom and her sister. But I guess you can’t fight want the hearts wants!”

Next week, The Young and the Restless spoilers say Abby and Arturo will kick the passion up a notch. It sounds like they’ll make love and start to move this relationship along. Abby’s slowly starting to trust Arturo, despite all the little hiccups along the way. That may turn out to be a mistake, but Abby’s a “live and learn” kind of gal. She always manages to overcome life’s obstacles.

As for Nikki (Melody Thomas Scott) and Abby’s latest feud, it caught Ordway by surprise. She admitted she’s had a blast battling it out on screen, but she’s hoping true love will prevail. Ordway said, “…For me, I feel like Nikki and Victor belong together. They are the power couple, and so I don’t feel like Nikki should be with any other guy. I feel like she should always be with Victor.”

Many Y&R viewers feel the same way! If Nikki could really walk away from Victor for good, she would’ve done it by now. These two can’t quit each other, so they need to accept that and just deal with all the flaws of this relationship.

Ordway also had plenty of praise for Dina’s (Marla Adams) Alzheimer’s storyline and her talented costars. She insisted that Marla Adams “is knocking it out of the park” and Peter Bergman (Jack) is “always incredible.” Ordway added that her own grandmother faced Alzheimer’s struggles, so she’s glad Y&R’s highlighting what affected families go through.

Finally, Ordway dropped some hints about Summer (Hunter King) and all her chaos. Do Abby and Summer have any fierce fights coming up? “You know, we’ll see,” Ordway said. “She has a lot of juicy stuff going on, and I think the fans will be really excited to see what’s going on with Summer.