BY Heather Hughes on August 10, 2018 | Comments: one comment
Related : Soap Opera, Spoiler, Television, The Young and the Restless 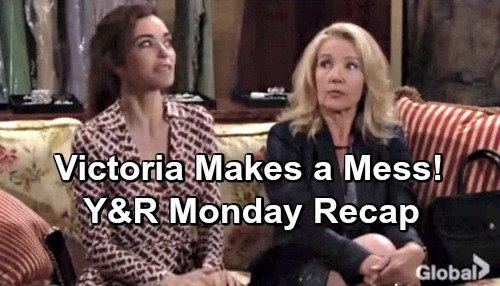 The Young and the Restless (Y&R) spoilers update and recap for Monday, August 13, tease that Sharon (Sharon Case) will round up her bridesmaids. Mariah (Camryn Grimes) won’t be pleased by another girls’ night ambush, especially since Summer (Hunter King) will be there to drive her up the wall. Nevertheless, Mariah will tough it out as Sharon summons Victoria (Amelia Heinle).

Y&R fans can expect Victoria to be taken aback by the bridesmaid request, but she won’t be able to get out of it. Once Victoria updates Nikki (Melody Thomas Scott), they’ll both head over to the cottage. Meanwhile, Phyllis (Gina Tognoni) will worry that her unruly daughter’s up to something. She’ll eventually track Summer down and join the awkward party.

The Young and the Restless spoilers say Summer and Phyllis will argue in front of everyone. They’ll debate whether Phyllis is wild enough for Billy (Jason Thompson), so Summer obviously won’t think so. However, the rest of the ladies will side with Phyllis. Sharon will note that all couples have tension. She’ll point to her blowup with Nick (Joshua Morrow) as an example, so Summer will try to learn more.

When pressed, Mariah will admit that Nick stayed out all night after a fight. Summer will file that info away for a revelation later. Until then, Nick will show up with questions about the party. Victoria will make matters worse by suggesting Phyllis as a bridesmaid option. Sharon and Phyllis will quickly contend that it’d be better for Phyllis to be on the guest list.

Once Nick heads out and a dress style’s chosen, the women will share a toast to Hilary (Mishael Morgan). After a shouting match with Summer, Mariah will head up to her room. Summer will also take off, so that’ll leave the cover-up crew to talk. Victoria will get flak over the Phyllis bridesmaid suggestion, but Nikki will urge everybody to simmer down. They’ll shift the conversation to their secret.

Phyllis, Sharon, Victoria and Nikki are all under plenty of stress. Nevertheless, they’ll reaffirm their pact to keep quiet about J.T. (Thad Luckinbill). At Jabot, Ashley (Eileen Davidson) will spar with Billy before discussing the drama with Kyle (Michael Mealor). They’ll agree that Billy has to be stopped, but Kyle will expect to be repaid for his loyalty.

Later, Ashley will admit her scheme to Kyle. She’ll bring up the leasing company she wants Dark Horse to purchase. If Jack (Peter Bergman) gets it done, they can stop the boutiques. The Young and the Restless spoilers say Kyle will approve of Ash’s sneakiness. Unfortunately, an unexpected snag will hit moments later. Summer will see them together and assume they’re up to no good.

After Summer grills them a bit, Ashley will tell Kyle to take care of his ex. Back with Billy, he’ll get a visit from Summer. She’ll warn him about Kyle and Ashley’s alliance, but Billy will just want her to leave. Of course, Summer won’t buy that he doesn’t want her around. She’ll imply that Billy’s just trying to convince himself of that.

At the athletic club, Cane (Daniel Goddard) and Lily (Christel Khalil) will have dinner with the twins. Mattie (Lexie Stevenson) and Charlie (Noah Alexander Gerry) will be nervous about Lily’s potential prison sentence, but Cane will reassure them. Once Charlie pulls Mattie aside, he’ll hint that he’s got a plan.

Cane will reveal a plan of his own to Lily. She’ll be shocked when Cane admits he bought one-way plane tickets to Australia. Cane will insist that they have to leave tonight, but Lily won’t look like she’s on board.