The Young and the Restless Spoilers: Monday, August 20 Update – Billy Makes a Surprising Confession – Mariah Spills a Secret to Devon 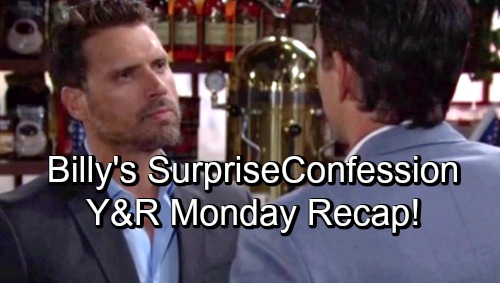 The Young and the Restless (Y&R) spoilers for Monday, August 20, tease that Jack (Peter Bergman) will push Nick (Joshua Morrow) to scoop up the leasing company Jabot’s using. He’ll think it’d be a great way to get the upper hand on Billy (Jason Thompson), but Nick will seem hesitant. Nevertheless, Jack will urge Nick to focus on his long-term strategy.

Meanwhile, Summer (Hunter King) will try to corner Billy at home. He’ll ignore her and head off to Crimson Lights, where he’ll run into Cane (Daniel Goddard). After getting updates on Lily’s (Christel Khalil) potential punishment, Billy will offer some support. He’ll understand that Cane was just trying to help the woman he loves. They’ll discuss their mistakes and how they both want to be better men.

Nearby, Mariah (Camryn Grimes) will be glued to her phone. She’ll try sending Tessa (Cait Fairbanks) some texts, but she won’t get a reply. Later, Mariah will drop by Devon’s (Bryton James) place to see how he’s holding up. Devon will confess that he’s not doing very well. He’s upset over all the reminders of Hilary (Mishael Morgan), so he’ll plan to donate her clothes to charity.

Mariah will pitch in as they sort through Hilary’s stuff. She’ll notice a familiar outfit and reflect on how much she learned from her boss. When Mariah’s phone dings, her face will flicker with hope and then disappointment. A suspicious Devon will tell Mariah to spill, so she’ll admit she’s worried about Tessa. Mariah will blab about Crystal (Morgan Obenreder), the dropped call and the lack of messages.

The Young and the Restless spoilers say Devon will offer advice. He’ll think Mariah should do whatever she can to get in touch with Tessa. Devon will also decide to keep Hilary’s clothes for a while. It seems Mariah’s visit will help him see that he needs to hold on to the memories.

At Neil’s (Kristoff St. John) penthouse, he’ll wish Ashley (Eileen Davidson) a good morning and try to figure out where they stand. Nate (Brooks Darnell) will appear before they can address their relationship status. Once Ashley’s gone, Nate will encourage Neil to go after what he wants. He’ll think Neil needs to be honest with Ashley, but she’ll tell him she’s busy when he reaches out again.

Neil will also pressure Devon to make peace with Lily in Monday’s new Y&R episode, August 20. He still won’t be ready, so Lily will have to keep suffering. At The Dive Bar, Nick will realize Summer’s searching for Billy. He’ll accuse her of going after Phyllis’ (Gina Tognoni) boyfriend to stir the pot.

Afterward, Nick will run into Billy and explain that he’s his new landlord. He purchased the leasing company, so Billy won’t be happy. Jack and Ashley, on the other hand, will think this is great news. They’ll hope Nick will cancel the leases for the new boutiques, but Nick will simply raise the rent later this week.

Finally, Summer will find Billy getting on the Jabot elevator. She’ll hop on as well and secure a captive audience. After Summer pushes and pushes, Billy will confess that he might be attracted to her in some alternate universe. However, Billy’s committed to Phyllis in this one.

Summer will suggest that Phyllis isn’t as committed as Billy is. She won’t think he should fight their spark, but Billy will ultimately exit the elevator and shut all this down. The Young and the Restless spoilers say Summer will keep at it, so we’ll keep you posted as other details emerge. Stick with Y&R and don’t forget to check CDL often for the latest Young and the Restless spoilers, updates, and news.