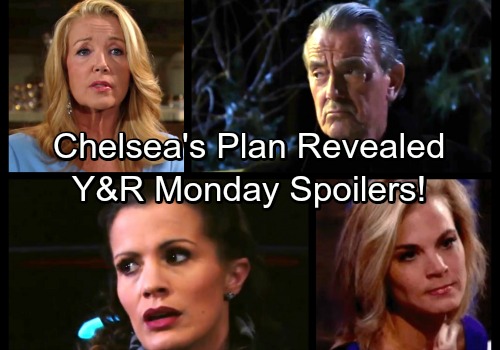 The Young and the Restless (Y&R) spoilers for Monday, February 26, tease that Victor (Eric Braeden) will face questions. Nikki (Melody Thomas Scott) and Phyllis (Gina Tognoni) will try to figure out what he knows about Chelsea’s (Melissa Claire Egan) latest move. Since Phyllis is in the loop on Christian’s (Jude and Ozzy McGuigen) paternity, she’ll probably spill it to Nikki and make Victor tell the whole ugly story.

Nikki may be miffed that Victor left her in the dark, but it looks like she’ll put the issue on hold. Now’s not the time to play the blame game or launch tirades. Nikki will just want to find Chelsea before she disappears for good. She’ll certainly be worried about getting the grandkids back.

The Young and the Restless spoilers say Victor will share some terrible news. He’ll admit he already searched for Chelsea and came up empty. Chelsea switched cars as part of her getaway plan, so that’ll make it a lot harder to track her down. Nevertheless, Victor and Nikki won’t give up. They’ll join forces to take care of business!

Fortunately, Christian will be safe and sound with Nick (Joshua Morrow) by then. On Friday’s Y&R episode, Chelsea changes her mind and leaves Christian on Victoria’s (Amelia Heinle) doorstep. At least that’s one kid Victor and Nikki can check off the list. However, they’ll still hate the thought of never seeing Connor (Gunner and Ryder Gadbois) again.

Here’s where Phyllis could come in handy. She might take her new evidence to Paul (Doug Davidson) so they can put an APB out on Chelsea. Victor will undoubtedly think Connor would be better off with the rest of the Newman family. He’ll want Chelsea thrown behind bars for everything she’s done – good thing the same standards don’t seem to apply to The Moustache or he’d be locked up for life!

Anita (Catherine Bach) seems to be awaiting Chelsea and Connor’s arrival, so we’ll see if they make it there. Meanwhile, the secret-keepers will have another decision to make. The Young and the Restless spoilers say Victor and Nikki will do whatever they can to protect the family. They may want Phyllis to keep her mouth shut about Christian’s paternity.

Of course, Sharon (Sharon Case) is a far greater threat. She’ll finally drop the bomb on Nick later during the week of February 26, so that’ll be another major blow to deal with. We’ll give you updates as other Y&R details emerge. Stay tuned to the CBS soap and don’t forget to check CDL often for the latest Young and the Restless spoilers, updates and news.