BY Heather Hughes on January 26, 2018 | Comments: one comment
Related : Soap Opera, Spoiler, Television, The Young and the Restless 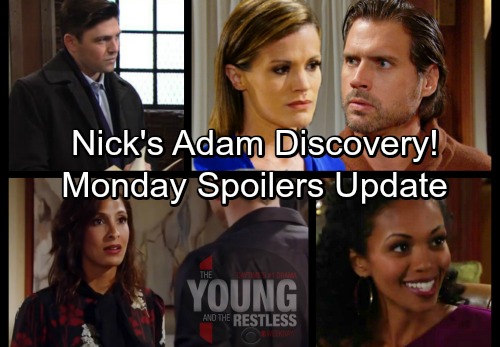 The Young and the Restless (Y&R) spoilers for Monday, January 29, tease that Noah (Robert Adamson) will storm in Hamilton-Winters. He’ll dump a box of Tessa’s (Cait Fairbanks) stuff in front of her and fill Devon (Bryton James) in on the San Francisco kiss. Once Noah’s gone, Tessa will scramble to explain.

Later, Devon will meet up with Mariah (Camryn Grimes) to get her side of the story. After Mariah apologizes for the way things played out, Devon will respond with compassion. The Young and the Restless spoilers say they’ll share a hug and promise that they’re still friends. Back with Tessa, she’ll secretly camp out on the sofa at work.

Meanwhile, Hilary (Mishael Morgan) will get some positive updates. Her test results will say it’s the ideal time to conceive. Hilary will just need a sperm donor to help her out. When Billy (Jason Thompson) and Phyllis (Gina Tognoni) hear the news, they’ll suggest Hilary shouldn’t rush into anything.

After Hilary leaves, Phyllis and Billy will face some awkward moments. They’ll question each other about their own baby desires. Billy and Phyllis will both insist that they aren’t interested, but they’ll exchange a perplexing look.

Other Y&R spoilers say Lily (Christel Khalil) will skip spending time with Sam. She’ll tell Cane (Daniel Goddard) she has to work, but he’ll try to get in touch later. Victor (Eric Braeden) will note that Cane must be mistaken. He’ll insist that Victoria’s (Amelia Heinle) out of town, so Lily can’t be working with her right now.

When Cane calls Lily, she’ll lie that Victoria’s really piling things on her. Lily will keep the fibs coming once she gets home. Cane will pretend he’s in the dark on Lily’s deception, but he’ll seem quite concerned.

Elsewhere, Billy will warn Ashley (Eileen Davidson) about the dangers of making a deal with Victor. However, he’ll admit it would drive Jack (Peter Bergman) up the wall. Since that’s Ashley’s goal, this is a good way to achieve it. Ashley will eventually meet back up with Victor to share her demands. She’ll want the title he promised as well as a board seat and special funding.

Ashley will add that she needs authority over a few divisions. She’ll want Brash and Sassy to be one of them, so she’ll wonder if Victoria can handle that. Victor will vow to take care of it. He’ll ask if Ashley’s ready to commit to Newman.

Finally, Nick (Joshua Morrow) will spot some stacks of cash in the penthouse vents. He’ll stumble across the money during renovations. When Chelsea (Melissa Claire Egan) comes home, Nick will show her the cash and await answers.

Chelsea will have to defend Adam’s (Justin Hartley) actions later this week, so it sounds like he was behind the hidden loot. We’ll keep you posted as other Young and the Restless details emerge. Stick with Y&R and don’t forget to check CDL often for the latest Young and the Restless spoilers, updates and news.