BY Marcy Cohen on July 12, 2018 | Comments: one comment
Related : Soap Opera, Spoiler, Television, The Young and the Restless 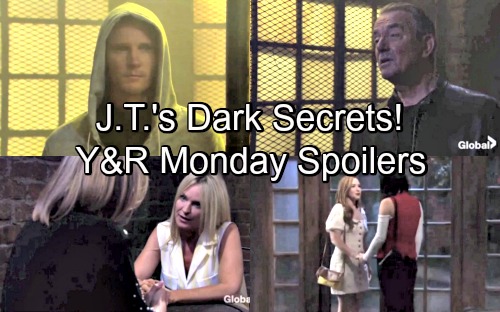 The Young and the Restless (Y&R) spoilers for Monday, July 16, tease that panic will set in for the cover-up crew. In Friday’s episode, July 13, Victor (Eric Braeden) insists on having a dangerous meeting with J.T. (Thad Luckinbill). Nikki’s (Melody Thomas Scott) naturally worried about her husband’s safety, but there’ll be even more to worry about soon.

On Monday’s new Y&R episode, July 16, Phyllis (Gina Tognoni) and Sharon (Sharon Case) will discuss this shocking showdown. J.T. could be blabbing to Victor about the night he “died,” so that’s definitely cause for concern. They’ve been keeping secrets from their significant others, so there’s a lot on the line.

Even if Phyllis and Sharon manage to avoid legal drama, Billy (Jason Thompson) and Nick (Joshua Morrow) still wouldn’t like being lied to. Of course, Billy’s keeping a few secrets as well. He’s in no position to judge! As for Victoria (Amelia Heinle), she’ll continue to fret over Victor and the possibility of his murder. Victor and J.T. should be fierce competitors, but they’ll both walk away alive for now.

We should note that there’s no confirmation this is the actual J.T. He could be a doppelganger sent by someone else. The Young and the Restless has been known to throw in crazy twists, so it should be interesting to learn the whole story. In the meantime, Victor will hurl insults at J.T. and do his best to rattle him a bit.

Other Y&R spoilers say Mariah (Camryn Grimes) and Tessa (Cait Fairbanks) will have an honest conversation. Thanks to Kyle’s (Michael Mealor) setup, the women could be gearing up for a real relationship. Mariah will think the world’s telling them to be more than friends, so she may suggest giving it a shot. Will Tessa be on board with the idea?

Jack (Peter Bergman) should also learn the DNA results soon. They arrive on Friday, so Jack might be ready to open them in Monday’s episode. Finally, Neil (Kristoff St. John) and Ashley’s (Eileen Davidson) romance will hotter. As things get pretty intense, a shirtless Neil will suddenly pull back. He’ll smile, but he may wonder if they’re moving too fast.

Ashley and Neil need to take their time if they want this to last. Unfortunately, Eileen Davidson is leaving Y&R in September. The Young and the Restless spoilers say Neil and Ashley are doomed no matter what! We’ll give you updates as other news comes in. Stay tuned to the CBS soap and don’t forget to check CDL often for the latest Young and the Restless spoilers, updates, and news.

It’s the moment you’ve been waiting for! Here’s a sneak peek at tomorrow’s Friday the 13th showdown between Victor and J.T. #YR pic.twitter.com/8ZMKqMX0en