BY Heather Hughes on May 31, 2018 | Comments: 2 comments
Related : Soap Opera, Spoiler, Television, The Young and the Restless 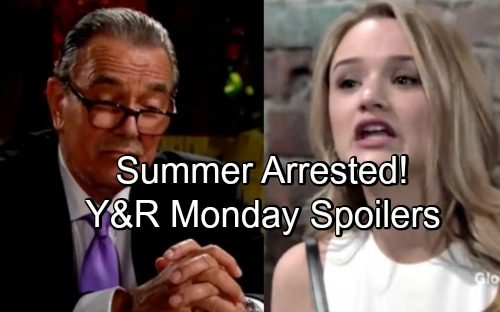 The Young and the Restless (Y&R) spoilers for Monday, June 4, tease that a big episode’s on the way. First, we’ll see a major return. Summer Newman (Hunter King) will finally make her way back to Genoa City. She’ll run into serious trouble right off the bat.

Summer will be spotted in her car on Monday, so she may be pulled over for something. We know she’ll land in the slammer soon, so Summer may break the law and get on a cop’s bad side. An arrest is definitely looming, which means Phyllis (Gina Tognoni) and Nick (Joshua Morrow) will have to deal with their daughter’s legal drama.

Meanwhile, Jack (Peter Bergman) will need a new home. He recently decided to move out of the Abbott house and give himself some space. Jack could’ve just stayed at the athletic club, but it seems he has something more permanent in mind. The Young and the Restless spoilers say Jack will meet with a real estate agent in Monday’s episode. She’ll be a familiar face to Y&R viewers.

Farrah Dubose (Erika Girardi) will return to show Jack some options and hopefully close a deal. However, Jack will also choose to do some flirting while Farrah’s around. It’s been a while since Jack cozied up to a woman, so he might as well. Ashley (Eileen Davidson) will also share scenes with Farrah during this storyline. We could see some clashing between these feisty blondes!

Other Young and the Restless spoilers say Hilary (Mishael Morgan) will plan on moving, too. She needs to be close to Devon (Bryton James) when the baby eventually arrives. Devon recently suggested getting Hilary a place in the same building, but things have changed since then. Now Devon and Hilary’s romance is heating back up, so he’ll want her to just go ahead and move in with him.

Finally, let’s talk about Victor (Eric Braeden). At some point this week, Jun 4-8, he’ll follow through on his cruel plan. Victor will tell Nick (Joshua Morrow) that he’s suing for full custody of Christian (Jude and Ozzy), so the battle for the tot will officially kick off.

It sounds like Nick and Victor’s war will get messy. You can bet plenty of family members will be dragged into all this. We’ll give you updates as other Y&R news comes in. Stick with the CBS soap and don’t forget to check CDL often for the latest Young and the Restless spoilers, updates, and news.