BY Kinsley Goldman on March 8, 2018 | Comments: one comment
Related : Soap Opera, Spoiler, Television, The Young and the Restless 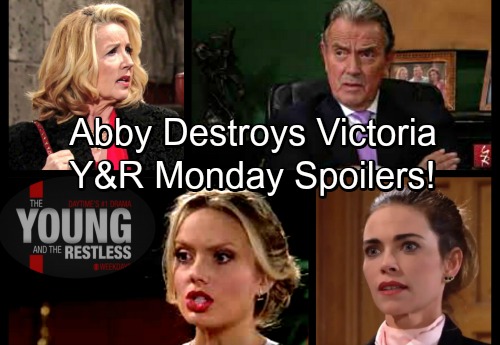 The Young and the Restless (Y&R) spoilers for Monday, March 12, tease that the war will be on! Victoria (Amelia Heinle) will hit the roof when she finds out Abby (Melissa Ordway) fought back. On Friday’s episode, March 9, Victor (Eric Braeden) tells Ashley (Eileen Davidson) that she’s fired. However, Abby later presents evidence that Victoria teamed up with Jack (Peter Bergman).

Victor will have to rethink a few things on Monday. Will he apologize to Ashley and call for her return to Newman Enterprises? Will Victor kick Victoria to the curb? It could be a bit tougher for Victor to fire his own daughter, but he usually doesn’t tolerate disloyalty. Victoria intentionally deceived her father, so there will undoubtedly be some consequences.

Even if Victor isn’t willing to toss Victoria out completely, he could always demote her. Abby has proven that she’s a take charge kind of gal. Victor may appreciate the way she stood up for what she believed. This could turn into a lucky break for Abby, but Victoria obviously won’t approve. She’ll fight for her job and rip into Abby for spoiling her scheme.

The Young and the Restless spoilers say Abby and Victoria will have a fierce showdown. They’ll trade barbs and shout vicious accusations. These sisters have truly had it with each other! It should be fun to watch Victoria and Abby battle it out. J.T. (Thad Luckinbell) will get caught in the chaos soon, so stay tuned for his inevitable outburst.

Meanwhile, Nikki (Melody Thomas Scott) will deal with some mayhem of her own. Y&R fans will see Nikki get caught and confronted early in the week. It sounds like maybe someone will find out about her hot hookups with Arturo (Jason Canela). Phyllis (Gina Tognoni) knows what’s going on, but she thinks it’s great that Nikki’s spicing up her love life. However, the next person in the loop may object.

If Victor discovers the truth, that’ll add to all the family drama. Victor and Nikki’s relationship is still more of an arrangement, but that won’t stop the green-eyed monster from rearing its ugly head. Of course, another Young and the Restless character might find out first. Nikki could be forced to defend her choices soon enough.

Some exciting scenes are ahead on the CBS soap. We’ll give you updates as other news comes in. Stick with Y&R and don’t forget to check CDL often for the latest Young and the Restless spoilers, updates and news.