BY Heather Hughes on May 18, 2018 | Comments: 2 comments
Related : Soap Opera, Spoiler, Television, The Young and the Restless 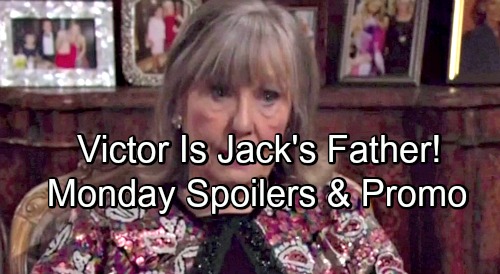 The Young and the Restless (Y&R) spoilers for Monday, May 21, tease that Mariah (Camryn Grimes) will get quite a shock. When she arrives home looking for Sharon (Sharon Case) and Nick (Joshua Morrow), she’ll find them in bed together! Mariah will be horrified and quickly head back downstairs.

Once Mariah wraps her head around what she witnessed, she’ll admit anyone could’ve seen this coming. Sharon and Nick will try to explain their reunion. They’ll promise that they’re committed to each other and intend to correct the mistakes of the past. Mariah just won’t see how things are going to be any different, but she’ll suggest she’s going to stay out of it.

After Mariah’s gone, Nick and Sharon will acknowledge her concerns. Mariah clearly thinks they’re heading down the same old road. Nevertheless, Nick and Sharon will determine that they’re different people now. They’ve grown and changed, so they’ll think their relationship can do the same.

Other Young and the Restless spoilers say Jack (Peter Bergman) will have a horrible nightmare. He’ll dream of Dina (Marla Adams) revealing that Victor’s (Eric Braeden) his father. Once Jack awakens, he’ll visualize Dina sitting there with him. She’ll hurl insults, so he’ll shout at his imaginary mother to stop.

Meanwhile, Neil (Kristoff St. John) will share Jack’s whereabouts with Ashley (Eileen Davidson) and Billy (Jason Thompson). He’ll confess that he saw Jack at the cabin contemplating painkillers. Neil’s news will obviously be disturbing, so Billy and Ash will head off to save Jack from himself.

Unfortunately, Jack will be gone by the time they arrive. They’ll see that he spelled out “NO” in pills on the table. At home, Ashley and Billy will finally catch up with Jack. He’ll act nonchalant and suggest Jabot’s in for an interesting day tomorrow. It seems Jack’s got a few tricks up his sleeve.

At Hamilton-Winters, Hilary (Mishael Morgan) and Devon (Bryton James) will discuss living arrangements. Y&R spoilers say Hilary will drop a hint about living close to the penthouse. Devon will think that’s an excellent idea. He’ll offer his building manager’s number in case there are some spots open.

That won’t exactly be what Hilary has in mind, but she’ll express her gratitude. Talk will turn to nursery plans a little later. Devon will promise to let Hilary have some input. He’s been sending some mixed signals, so Hilary will confess she’s struggling to read the situation. Devon will think the guessing game is what makes it fun.

Afterward, Shauna (Camryn Hamm) will pop in for a chat with her mentor. She’ll reveal that she isn’t going to prom, so Hilary will assume this involves boy drama. Shauna will also question Devon about the baby plan. She won’t see why they’re having a kid apart instead of together.

Once the next day’s guest cancels, Hilary and Mariah will be left scrambling. Luckily, Devon will call someone to make special arrangements. It looks like he’s cooking up a GC Buzz prom. We’ll give you updates as other Young and the Restless details emerge. Stick with Y&R and don’t forget to check CDL often for the latest Young and the Restless spoilers, updates, and news.