BY Heather Hughes on May 24, 2018 | Comments: 2 comments
Related : Soap Opera, Spoiler, Television, The Young and the Restless 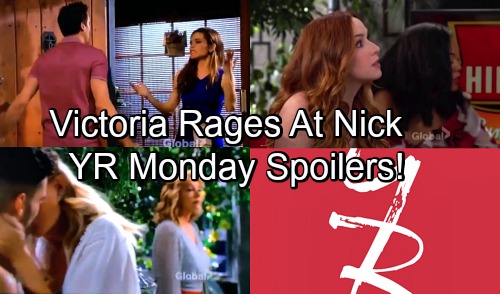 The Young and the Restless (Y&R) spoilers for Monday, May 28, tease that Victoria (Amelia Heinle) will face quite a bombshell. When she heard Nick (Joshua Morrow) might be returning to Newman, she was all for it. Victoria loved the idea of having another Newman in her corner. Things are always tense when Ashley’s (Eileen Davidson) around and Victoria bickers with Abby (Melissa Ordway) constantly.

Now that Nick has officially decided to come back, Victor (Eric Braeden) will waste no time in shaking up the chain of command. The Young and the Restless spoilers say Victoria will be ready for a fight. When Nick answers the door, Victoria will rip into him. She’ll wonder when Nick was going to tell her that he’s taking her job.

There’s a chance this will be brand-new info to Nick. It might be something Victor cooked up behind both their backs. Even if Nick’s in the loop before the argument, he certainly wasn’t trying to push Victoria aside. Of course, Nick probably won’t turn down the position. If Victor thinks he’s the right fit, Nick may contend that they should think about what’s best for the company.

Y&R fans can expect Victor’s move to cause serious issues within the Newman clan. Victoria won’t be the only one blindsided over the next few episodes. Victor has some secrets that are sure to bring more trouble. Nick will face off with his father pretty soon, so stay tuned for their typical conflict.

In the meantime, Abby and Arturo (Jason Canela) will turn up the heat. In Friday’s episode, May 25, Arturo accepts Abby’s invitation and they plan a trip to Miami. Next week, they’ll grow increasingly excited about bonding on their getaway. The Young and the Restless spoilers say Nikki (Melody Thomas Scott) will be jealous when she spots Abby and Arturo’s steamy kiss.

Y&R’s new preview video also points to embarrassment for Kyle (Michael Mealor). It appears the incident may happen later in the week, but we’ll go ahead and mention the mishap. On live TV, Kyle will show off how a Jabot body product holds up in water. After a swim, he’ll suggest that his “hashtags” haven’t smudged a bit.

Unfortunately, Kyle will soon realize he’s completely naked. Mariah (Camryn Grimes) will note that he forgot something as she scrambles to cover him up. It sounds like some fun scenes are on the way! We’ll give you updates as other Y&R news comes in. Stick with the CBS soap and don’t forget to check CDL often for the latest Young and the Restless spoilers, updates, and news.