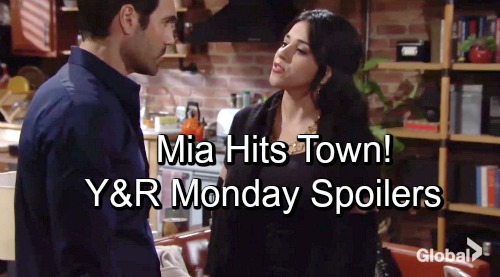 The Young and the Restless (Y&R) spoilers for Monday, November 12, tease that Sharon (Sharon Case) and Rey (Jordi Vilasuso) will battle some awkwardness. These two have been dealing with the push and pull of their feelings lately. Sharon nearly quits her job on Friday, so there’s obviously way too much sexual tension. Of course, she fears Rey will learn the J.T. (Thad Luckinbill) shocker as well.

Rey convinces Sharon to stick around, so they’ll try to deal with their emotions on Monday. This clearly won’t easy to navigate. Rey won’t want to betray his estranged wife, Mia (Noemi Gonzalez), but he’ll remain incredibly drawn to Sharon. However, conflict will break out after Rey interrogates Nick (Joshua Morrow). The detective will be seeking J.T. info, so that should leave Sharon on edge.

Y&R spoilers say Sharon will confront Rey about what he’s doing. She won’t think he really considers Nick a suspect in the case. Instead, Sharon will suggest this is about Rey’s feelings for her. She’ll rant about mixed signals, which will lead to another close moment. Rey and Sharon will share a kiss at some point, so “Shey” fans won’t want to miss that.

Things will get more complicated when Mia returns for her man! She’ll surprise Rey when she appears out of the blue and reveals that she missed him. It won’t take Mia long to discover Rey and Sharon’s special connection.

Other Young and the Restless spoilers say Phyllis (Gina Tognoni) and Nick will make a deal. They may decide to ignore all the drama swirling around them. Phyllis will also ask Nick to be her plus one for the Jaboutique launch party, which is happening later this week, November 12-16.

They’ll be giving the town something to talk about, but Nick may reiterate that he doesn’t care. He just wants to find a little happiness wherever he can. Nick and Phyllis are on the same wavelength right now, so they’re going to see where this casual romance takes them.