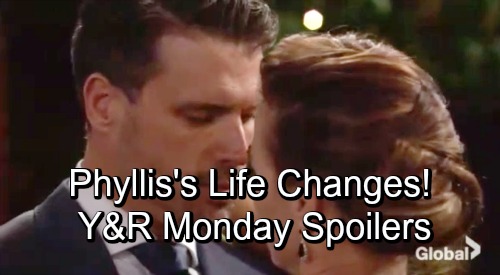 The Young and the Restless (Y&R) spoilers for Monday, November 19, tease that Abby’s (Melissa Ordway) fears will come true. On Friday, Abby expresses concern about Arturo (Jason Canela) and Mia’s (Noemi Gonzalez) lingering connection. Thanks to the affair news, Abby worries that Arturo may end up cheating on her, too.

Arturo reassures Abby, but it looks like Monday will confirm her concerns! The Young and the Restless spoilers say Mia will prove she’s a real troublemaker. Despite her constant attempts to reunite with Rey, she’ll make a move on Arturo. Mia was with Arturo before she got together with Rey (Jordi Vilasuso), so these two go way back. It seems Mia wouldn’t mind a sexy reunion with Arturo either!

The Young and the Restless spoilers say Mia will put her hands on Arturo’s chest. She’ll insist that they’ve left so much unresolved between them. Mia will make a crack about Arturo’s blonde girlfriend and imply that he doesn’t really care about her. Naturally, Abby will walk in at that exact moment. She won’t be happy about Mia making a play for her man.

Of course, Arturo’s reaction will matter here. He’ll seem agitated by Mia’s behavior, so maybe he can show Abby that he’s done with her. She might try to believe that, but it’ll be tough as long as relentless Mia’s around. Y&R fans can expect her to circle both of the Rosales brothers like a vulture. Will Mia end up blowing up the family all over again? The tension is certainly rising in Genoa City!

Other Young and the Restless spoilers state that Nick (Joshua Morrow) will await an answer. He asks Phyllis (Gina Tognoni) to move in with him on Friday’s Y&R episode, November 16, so she may give him her decision on Monday. Will Phyllis realize this whole situation screams “rebound” and pump the brakes? Phyllis has some common sense occasionally, so that’s a possibility.

However, Nick and Phyllis are a little out of control right now. They’re having some sort of romantic crisis, so Phyllis may accept against her better judgment. Regardless, “Phick” will move forward and that’s sure to bring even more drama.