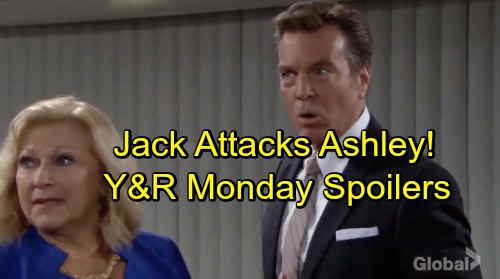 The Young and the Restless (Y&R) spoilers for Monday, October 15, tease that Jack (Peter Bergman) and Ashley (Eileen Davidson) will face off. Friday’s episode brings a long-awaited revelation for many Y&R fans. Jack’s been hitting dead end after dead end in his search for paternity answers. Plenty of people suspected Jack was a blood Abbott after all, so we were just waiting on the truth to come out.

Since Ashley confirms that on Friday’s new episode, October 12, Monday will bring some rage-filled questions. The Young and the Restless spoilers say there’ll be some confusion about Ashley’s motives. Traci (Beth Maitland) will try to keep the peace as Jack grows increasingly riled. He’ll snap that no one understand how Ashley could do this, but she’s going to explain it to him. Jack won’t back off until Ashley admits EVERYTHING.

Ashley will stand there with her arms folded looking smug. She might feel like this is payback for the way Jack treated her. He tried to act like she wasn’t good enough because she wasn’t a blood Abbott. Jack used the clause against Ashley and refused to let her run the show, so she probably decided to fight fire with fire. Ashley was able to make Jack feel the same pain she felt.

Of course, part of Ashley will have remorse for her actions. She recently admitted she wasn’t exactly proud of what it took to get to the top. Still, Ashley may think Jack deserved this on some level. The Young and the Restless spoilers say we’ll see a fierce showdown between the siblings.

Jack will eventually pick up a nearby chair and smash it through the glass panel in the office. It’s clear that he’ll be spiraling out of control. As for Ashley, Jack will plan to make her sorry she dared to betray him like this. An Abbott war is beginning and it’s bound to get ugly.

Speaking of ugly wars, the cover-up crew will fear one. If they don’t pay the note sender, they could kick off a battle they can’t win. On Friday, Phyllis (Gina Tognoni) and Victoria (Amelia Heinle) receive the first and third digits of the amount. It looks like Monday may bring the other digits, so they’ll know how much of a hit they’re going to take.

The Young and the Restless spoilers say Nikki (Melody Thomas Scott) will fume, but she’ll vow to pay it. She’ll just want this guy or gal off their back. The number the sender’s asking for starts with a 2, so Y&R probably wants us to think this is Tessa (Cait Fairbanks). However, she’d be awfully stupid to ask for anything remotely close to what she really owes.

Tessa would be better off steering clear of $20,000 or another 2 total. That doesn’t mean Y&R won’t write her as a dumb criminal, but perhaps other options should be looked at. Regardless, the girls’ night gang will prepare to pay up!

It sounds like some exciting developments are on the way. We’ll give you updates as other Y&R news comes in. Stay tuned to the CBS soap and don’t forget to check CDL often for the latest Young and the Restless spoilers, updates, and news.