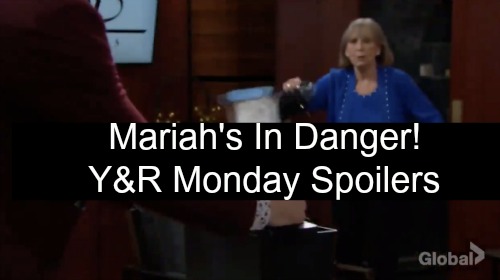 The Young and the Restless (Y&R) spoilers for Monday, October 22, tease that danger will hit Genoa City. Mariah’s (Camryn Grimes) in for a shock when she lands in harm’s way, so this probably has something to do with Tessa’s (Cait Fairbanks) situation. She’s paying her $20,000 in installments, but the smugglers probably aren’t keen on waiting a year for all their money.

The attack on Tessa didn’t help, so these baddies may be trying another tactic. Kidnapping or injuring Mariah would rev up the pressure and give Tessa a motive to come up with the cash. Of course, there seem to be a few puzzle pieces that Tessa’s leaving out. She’s most likely fibbing for Mariah and Crystal’s (Morgan Obenreder) protection, but her deception could end up backfiring.

This ordeal could also draw Sharon (Sharon Case) and Rey (Jordi Vilasuso) closer. You can bet Sharon will be a mess if Mariah goes missing or lands in the hospital. Rey will be happy to help in any way he can. As Sharon and Rey continue to bond, Nick (Joshua Morrow) won’t like it at all. He’ll be determined to drive them apart, so he’ll warn Rey that he’s coming for him.

Rey won’t be scared of Nick and any threats he makes. He’s brimming with confidence, especially when it comes to Sharon. Rey feels like he’s got a firm grip on who Sharon is and what makes her tick. He’s hoping to drag more J.T. (Thad Luckinbill) info out of her, but it’s clear that he’s falling for her, too. Y&R fans can expect things to get messy as time goes on, so don’t miss all the twists and turns.

Other Young and the Restless spoilers say Kyle (Michael Mealor) will find himself in a tight spot. Thanks to a secret in John’s (Jerry Douglas) safe, Kyle will be sitting on quite a bombshell. He’ll wonder if he should share it with his family or let it remain buried.

Kyle will eventually opt to shred the document, but Dina (Marla Adams) will thwart that plan. Jack (Peter Bergman) will finish the shredding job at some point this week, but that won’t stop Traci (Beth Maitland) from putting it back together. The truth must be revealed, so stay tuned.