The Young and the Restless Spoilers: Monday, September 17 – Billy Plays with Fire, Poised to Get Burned – Walls Close in on Ashley 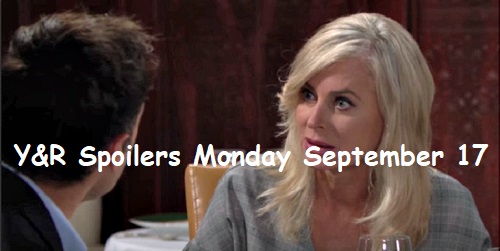 The Young and the Restless (Y&R) spoilers for Monday, September 17, tease that Billy (Jason Thompson) will cross lines he never wanted to cross. He’ll test the limits of what he can get away with, so that doesn’t sound like a great plan. Ever since Billy started gambling again, he’s been begging for trouble.

Phyllis (Gina Tognoni) feared Billy was headed down this path, but she wanted to be supportive. Perhaps some of that support stems from guilt over her own secrets. Phyllis is keeping Billy in the dark on the cover-up crew drama as well as her one-night stand with Nick (Joshua Morrow). Plus, she loves Billy and wants him to be happy. It’s tough for Phyllis to stand in his way.

Billy really comes alive when he’s betting, but he’ll feel like a dead man walking soon. He’ll play with fire on Monday, so it seems likely that he’ll get burned. Meanwhile, Ashley’s (Eileen Davidson) mystery meeting will bring some intriguing developments. Y&R viewers will learn a little more about what Ashley’s hiding and why.

This storyline’s popping up out of nowhere, but there’s a good reason for that. The Young and the Restless likely needs a quick way to usher Ashley off canvas. Eileen Davidson’s exit is rapidly approaching, so this clandestine meeting could be the beginning of the end. The guy Ashley’s in cahoots with could cause a few problems, especially if word gets out at Jabot.

Nick (Joshua Morrow) will also make an admission early this week. What secret will he tell and which character will he tell it to? Nick was already forced to reveal his J.T. (Thad Luckinbill) impersonation plot. It appears all that’s left is his hookup shocker, but there’s always a chance Nick’s hiding something else.

Whatever the case, it’s doubtful Sharon will hear about Phyllis and Nick’s sex session just yet. She’ll be on cloud nine at her graduation party by mid-week, so Nick won’t say anything to rain on her parade. We’ll give you updates as other Young and the Restless news comes in. Stay tuned to Y&R and don’t forget to check CDL often for the latest Young and the Restless spoilers, updates and news.