The Young and the Restless Spoilers: Monday, September 24 – Nate’s DNA News Shocks Jack and Victor – Jill’s Back with Tough Love

BY Marcy Cohen on September 21, 2018 | Comments: one comment
Related : Soap Opera, Spoiler, Television, The Young and the Restless 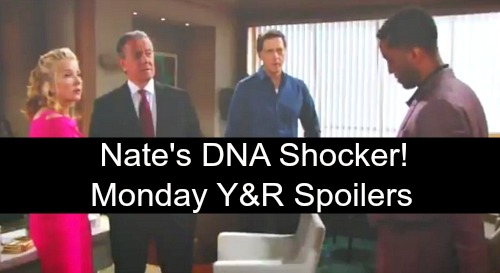 The Young and the Restless (Y&R) spoilers for Monday, September 24, tease that Billy (Jason Thompson) will be blindsided by his loved ones. Y&R fans know Billy’s been sinking deeper and deeper into his gambling addiction. He thought he could handle it, but he was clearly wrong.

Jill (Jess Walton) will make a trip home to visit Billy and get him the help he needs. When he walks in the room, Billy will be a bit confused by the gathering. Jill, Ashley (Eileen Davidson) Phyllis (Gina Tognoni), Abby (Melissa Ordway), Jack (Peter Bergman), Kyle (Michael Mealor), Traci (Beth Maitland) and Victoria (Amelia Heinle) will all be on hand. They’ll realize there’s strength in numbers here.

The Young and the Restless spoilers say Jill will step forward and softly mention Billy’s struggles. She’s heard he’s been gambling again, so she’ll let him know it. That’s when things will finally click for Billy. He’ll realize everyone’s come together to stage an intervention and get him back on track.

Naturally, Billy won’t think that’s necessary. He’ll promptly declare that they’re all out of their minds. However, Jill won’t allow Billy to avoid the issue. She’s the kind of gal who doesn’t take no for an answer. Jill may argue that Billy isn’t leaving that room until they at least talk about this. He can’t keep throwing money down the drain and taking crazy risks, especially on Jabot’s dime.

You can bet Kyle will pipe up about the embezzlement. Ashley may back him up on that and suggest that they have to protect the company’s legacy. However, Billy’s future will be what’s most important. His family won’t want him to become a slave to wagers and losses. Billy deserves the chance to break free and that’s what they’ll try to give him.

Unfortunately, Billy isn’t willing to admit he has a problem. What’s it going to take to make that happen? The Young and the Restless spoilers say Billy will have to face reality soon. If he doesn’t get his act together, Traci may vow to take the throne and get rid of the blood-Abbott clause. That’s what Ashley and Kyle are pushing for, so she may be willing to take that step.

Elsewhere, Nate (Brooks Darnell) will get Jack and Victor’s (Eric Braeden) DNA test results. Matt (Richard Gleason), Victor and Nikki (Melody Thomas Scott) will listen as Nate prepares to read them. Are Victor and Jack really brothers? Nate’s updates will be stunning, so the results may point in that direction – at least for now. The Young and the Restless could always undo it with a twist later!

It looks like Monday’s episode will be filled with family drama. We’ll keep you posted as other Y&R news comes in. Stay tuned to the CBS soap and don’t forget to check CDL often for the latest Young and the Restless spoilers, updates, and news.