The Young and the Restless Spoilers: Nate Desperately Tries To Save Hilary’s Life – Tragically Identifies With Devon’s Pain

BY hellodrdavis on July 23, 2018 | Comments: one comment
Related : Soap Opera, Spoiler, Television, The Young and the Restless 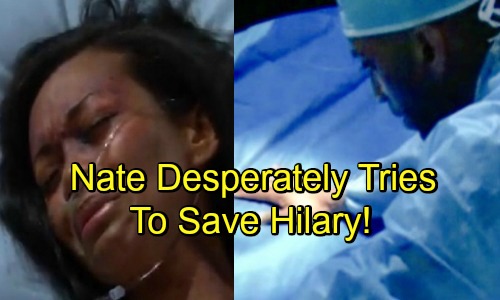 The Young and the Restless spoilers tease that Nate (Brooks Darnell) will do everything in his power to save a dying Hilary (Mishael Morgan). Hilary was gravely injured when Lily’s (Christel Khalil) car was hit by another vehicle. Hilary lost the baby she was carrying and now her life hangs in the balance.

Shortly after the accident, Nate arrived on the scene and quickly arranged to get privileges at the hospital so he could take over Hilary’s care. And Nate chose to operate on Hilary, rather than take a “wait and see” approach that the other physician wanted to take. Nate seems very driven to make sure that Hilary has every chance to survive her injuries.

It’s an interesting situation, since Hilary and Nate don’t get along. Hilary has been in Nate’s business ever since he arrived in Genoa City, and Nate hasn’t wanted anything to do with her or her neurotic ways. The two have sparred quite a bit, and one might think that Nate wouldn’t be so intensely driven to help her in the way that he has.

But Nate’s a caring guy deep down, and while he and Hilary didn’t get along in the short time they knew each other, a part of him may admire her strength and determination. In a way, they are a lot alike…they’re each a little abrasive and rough around the edges but have big hearts and really care about others.

Plus, Nate really cares about Devon (Bryton James) and he doesn’t want Devon to lose the love of his life. Nate lost his true love a year ago, and he’s all too familiar with that kind of pain. He probably wants to do everything he can to spare Devon from suffering the same trauma. Since Nate has medical expertise, it makes sense that he’d want to use this expertise to try to help Hilary survive her injuries.

Nate will do his best, but things don’t look good for Hilary. Will he find a way to save her? Stick with the CBS soap and don’t forget to check CDL often for the latest Young and the Restless spoilers, updates, and news.