The Young and the Restless Spoilers: Neil Devastated When Ashley Leaves – Sudden Departure Leads To Heartbreak

BY hellodrdavis on September 19, 2018 | Comments: one comment
Related : Soap Opera, Spoiler, Television, The Bold and the Beautiful 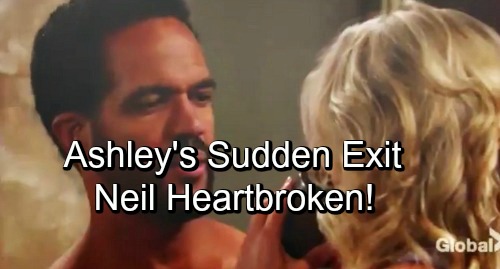 The Young and the Restless spoilers tease that Neil (Kristoff St. John) will soon be facing another heartbreak. He’s been dealing with the family feud between Devon (Bryton James) and Lily (Christel Khalil) and just lost Lily to a one-year prison sentence. It’s been a lot to deal with, but there has been one shining light for him in all the drama…Ashley (Eileen Davidson).

Neil and Ashley have been in a sort-of relationship for a while now. They enjoy each other’s company and Ashley’s been a welcome distraction for all of the tough times the Neil’s been going through. Neil’s been good for Ashley, too, as she’s needed a distraction from all the Billy (Jason Thompson) drama at Jabot.

But Eileen Davidson’s time on Y&R is rapidly drawing to a close. She’ll be off canvas by the end of September, so there’s going to be a pretty quick exit story for her. How her departure will go down remains to be seen, but one thing’s for sure. Neil’s going to be left out in the cold.

It seems that Neil may be more smitten with Ashley than she’s smitten with him. Neil seemed genuinely hurt and disappointed when he spotted Ashley with another man at the athletic club. Turns out it was just a business associate of Ashley’s, but Neil’s reaction made it clear that he’s truly falling for Ashley.

Of course, Ashley feels something for Neil, so it’s not entirely one-sided. But it seems that she may be in a place where she could take or leave the relationship, unlike Neil. That means that Ashley’s ultimate departure is probably going to hit Neil very hard.

Will Neil’s heart be broken when Ashley leaves? Stay tuned to the CBS soap and don’t forget to check CDL often for the latest Young and the Restless spoilers, updates, and news.