The Young and the Restless Spoilers Next 2 Weeks: Devon’s Worst Nightmare – Phyllis Confesses to Billy – Nick Hides His Trail

BY Marcy Cohen on July 21, 2018 | Comments: one comment
Related : Soap Opera, Spoiler, Television, The Young and the Restless 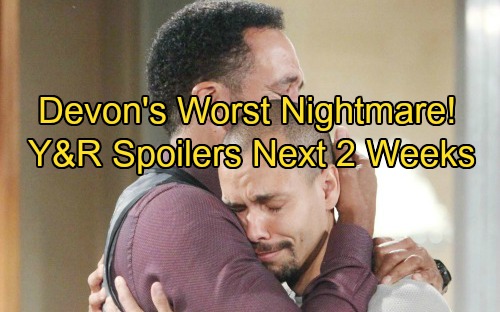 The Young and the Restless (Y&R) spoilers for the next two weeks tease that we’ll see some serious heartache in Genoa City. First, Devon (Bryton James) will face another round of bad news. After Nate (Brooks Darnell) looks at Hilary’s (Mishael Morgan) latest test results, he won’t have much hope for her recovery. Nate will suggest that Hilary probably isn’t going to make it.

Later, that probably will turn to a definitely in Nate’s mind. Devon will insist that Hilary could still pull through this, but Nate won’t agree. He’ll think that they’ve tried every possible way to save her life. Poor Devon will share some emotional moments with Lily (Christel Khalil) and the rest of his family. He’ll struggle to believe that he’s really about to lose his soul mate.

Devon will pop the question to Hilary as the clock keeps ticking. Internal bleeding is the culprit for this looming demise. The Young and the Restless spoilers say Devon will want to remarry Hilary before it’s too late. After some visits with all the people Hilary cares about, there’s a good chance she’ll slowly fade away.

Elsewhere, Phyllis (Gina Tognoni) will make a confession. She’ll leave Billy disappointed in her, so she may admit she hooked up with someone. Will Phyllis leave Nick’s (Joshua Morrow) name out of it or share the whole truth? Either way, it’ll widen the rift for “Philly” and make reconciliation even tougher.

It sounds like Summer (Hunter King) will worry about Billy during the week of July 30-August 3. The Young and the Restless spoilers say Kyle (Michael Mealor) will provide a distraction, but it may not last long. Summer will undoubtedly feel responsible for Billy’s suffering, so this could pull them closer.

Meanwhile, Nick certainly won’t want to come clean. He’ll hide his trail and hope that Sharon (Sharon Case) never discovers his hookup with Phyllis. Over with Abby (Melissa Ordway) and Arturo (Jason Canela), things will be much calmer. They’ll be on cloud nine as they mull over what’s ahead in their relationship.

Other Y&R spoilers state that Cane (Daniel Goddard) will get a terrible shock. Will this involve updates on Hilary’s death or perhaps proof that Lily caused the accident? The investigation may point in Lily’s direction soon. If so, she won’t be able to escape guilt and consequences much longer.

The Young and the Restless fans won’t want to miss the stunning drama ahead. The fallout of Hilary’s heartbreaking exit should be explosive! We’ll keep you posted as other Y&R details emerge. Stay tuned to the CBS soap and don’t forget to check CDL often for the latest Young and the Restless spoilers, updates, and news.