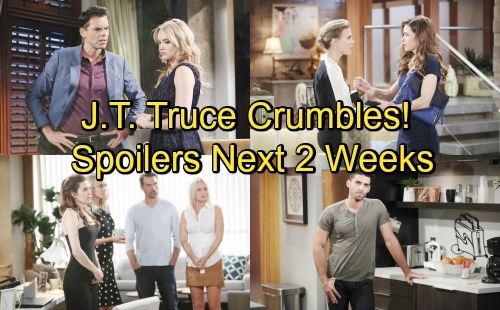 The Young and the Restless (Y&R) spoilers for the next two weeks tease that some surprises are in store. The week of June 25-29 will bring several big ones for the Newman clan. For starters, Nick (Joshua Morrow) and Victor (Eric Braeden) will put their feud on hold. Things have been tense thanks to the Christian (Jude and Ozzy McGuigen) custody situation, but another matter will have to come first.

As more J.T. (Thad Luckinbill) info comes to light, Victor and Nick will come together for a desperate search. They won’t want J.T. coming around to target Victoria (Amelia Heinle) or anyone else they care about. The Young and the Restless spoilers state that Victor will have to make a public statement soon. He’ll do his best to dismiss some scandals before speaking directly to J.T. on camera.

Ashley (Eileen Davidson) will also mention some eyewitnesses that saw J.T. in Iowa. There’ll even be some security footage, so Victoria will start shaking in her boots. She’ll worry that J.T. survived and is seeking revenge. Phyllis (Gina Tognoni) will do her best to comfort Victoria and make her believe that’s not true.

Later, Nick will get his Christian goal back on track. Y&R fans knew that J.T.-related truce wouldn’t last long! The Young and the Restless spoilers say Sharon will help Nick resume his fight for the boy. During the week of July 2-6, Ashley will take advantage of the unrest at Newman. She’ll make a power play and hope it works to her advantage.

Other Young and the Restless spoilers say Abby (Melissa Ordway) and Arturo (Jason Canela) will grow closer. They’ll get awfully steamy, so that probably means they’ll hit the sheets soon. Over with Kyle (Michael Mealor), he’ll focus on helping Jack get the proof he needs. After Dina’s (Marla Adams) confirmation on Phillip being his father, Jack will try to find a way to get his hands on evidence.

Finally, Billy (Jason Thompson) will face off with an old foe. Y&R fans can expect him to be on edge, especially after the previous week’s gambling. Summer’s setbacks at the poker table will force Billy to take action. Will he call his former bookie and set up some high-stakes bets? Summer’s inheritance could be on the line, so Billy may think it’s worth it.

Sadly, this could drag Billy back into the dark world of gambling. Temptation will take a toll on him, but let’s hope he can get his act together. We’ll give you updates as other Y&R news comes in. Stay tuned to the CBS soap and don’t forget to check CDL often for the latest Young and the Restless spoilers, updates, and news.