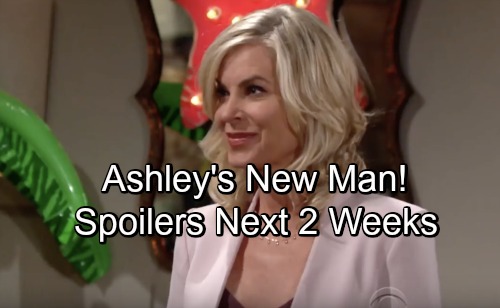 The Young and the Restless (Y&R) spoilers for the next two weeks tease that Genoa City will face some disasters. The week of July 2-6 will bring another hit for Victor (Eric Braeden) and Newman Enterprises. This time Nick (Joshua Morrow) will be to blame. He’ll push Brittany (Lauren Woodland) to use Victor’s dire condition in the custody fight and that terrible interview will be his proof.

Meanwhile, Phyllis’ (Gina Tognoni) bright idea won’t pan out. She’ll think the cover-up crew needs to do some digging and see if J.T.’s (Thad Luckinbill) body is still buried. Unfortunately, the park’s been spruced up lately and that’ll lead to an obstacle. Thanks to a concrete slab and a sculpture, they’ll just have to wait and wonder.

Later, some stunning J.T. info will come to light. There may be another hint that points to him being alive. Sharon (Sharon Case) and Nikki (Melody Thomas Scott) will certainly believe that soon. When a guy who looks like J.T. shows up outside the window, they’ll fear they’re in grave danger.

In the cemetery, Kyle (Michael Mealor) will take drastic action to help Jack (Peter Bergman). He’ll exhume Phillip Chancellor’s (Donnelly Rhodes) himself – or at least he’ll try to. Someone could easily come along and catch Kyle in the act!

Other Young and the Restless spoilers say Tessa (Cait Fairbanks) will get a mysterious message. Will it bring good news or bad news? Tessa won’t know, but she’ll intend to find out! Speaking of messages, Victor will also receive one during the week of July 9-13. He’ll be shocked, so maybe J.T. or his potential impersonator will contact him.

The blows seem to be building to something big, so Victor had better watch out! Across town, Nikki will really start to lose it. She’ll have a major meltdown, which could mean she’ll fear J.T.’s fury. Y&R fans can’t forget that Nikki’s the one who bashed him in the head. She may worry that J.T. will return the favor and make an attempt on her life.

Of course, Abby (Melissa Ordway) and Arturo (Jason Canela) will keep bringing the heat. That could spark a bit of a breakdown for Nikki, too. Over with Ashley (Eileen Davidson), she’ll also have romance on her mind. Someone will pursue Ashley, but which character will it be? Nate Hastings, Jr. (Brooks Darnell) will be back in town, so he might be an option. Ashley could be up for another younger man!

Finally, The Young and the Restless spoilers say Billy (Jason Thompson) will struggle to fight the darkness. It could be pulling him into the gambling pit thanks to Summer (Hunter King). We’ll give you updates as other Y&R details emerges. Stay tuned to the CBS soap and don’t forget to check CDL often for the latest Young and the Restless spoilers, updates, and news.