BY Marcy Cohen on December 16, 2018 | Comments: one comment
Related : Soap Opera, Spoiler, Television, The Young and the Restless 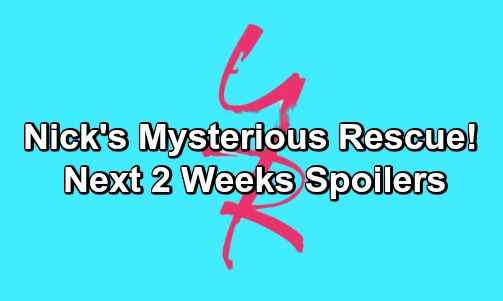 The Young and the Restless (Y&R) spoilers for the next two weeks tease that some dark moments are ahead for the Newmans. During the week of December 17-21, Reed (Tristan Lake Leabu) will unknowingly run down Nikki (Melody Thomas Scott) in Charlie’s (Noah Alexander Gerry) car. He really shouldn’t be driving thanks to his suspended license, but the consequences can come into play later.

For now, the Newmans will reel over Nikki’s serious condition. After Nikki’s unconscious body is found and taken to the hospital, Nate (Brooks Darnell) will identify her. He’ll make sure her loved ones get urgent calls while he works on Nikki in surgery. The Young and the Restless spoilers say Nikki will survive her operation, but her family will still have to fret.

Billy (Jason Thompson) will there for Victoria as she copes with this mess. They should grow closer as Victoria shows her vulnerable side. Meanwhile, Reed and Charlie will realize what happened. Once they receive word about the hit-and-run, they’ll do their best to hide their trail. Neither one of them will want the cops to know they were involved.

Over with Ana (Loren Lott), she’ll take things one step too far with Devon (Bryton James). Ana’s trying to be there for him, but it sounds like she’ll get pushy about it. She’ll cross the line and have to fight her way back to a better place in their relationship.

Meanwhile, Sharon (Sharon Case) will face the same task. Mariah (Camryn Grimes) was livid after Sharon not only took part in Tessa’s (Cait Fairbanks) tormenting, but sabotaged her job search, too. Since Sharon refuses to support Mariah’s romance, Mariah will decide she can refuse to take her mom’s calls. She won’t see what they have to talk about, but Tessa will convince her to at least pick up.

Unfortunately, the tension won’t be lifting just yet. On the bright side, Christmas is rapidly approaching and that means a opportunity to spread some holiday love. Sharon will do it by throwing a party during the week of December 24-28. Both Tessa and Mariah will be in attendance, so maybe Sharon will soften her stance a bit.

Other Young and the Restless spoilers say Jack (Peter Bergman) and Dina (Marla Adams) will do some reflecting. They’ll think back on some Christmases they shared many years ago. Elsewhere, Reed’s guilt will take a toll. He’ll decide he has to make a confession regarding the hit-and-run accident, so he may stop by to see Rey (Jordi Vilasuso) eventually.

Then again, some other Y&R twist could prevent Reed from blabbing. Whatever the case, Nick will deal with Nikki’s chaos in his own way. He’ll end up riding to the rescue for someone, so it sounds like some excellent drama’s ahead.

The Young and the Restless spoilers say Victor (Eric Braeden) and Noah (Robert Adamson) will also be back in Genoa City, so the whole Newman clan will have a chance to rally around Nikki. She’ll survive and thrive sooner or later. We’ll give you updates as other news comes in. Stay tuned to Y&R and don’t forget to check CDL often for the latest Young and the Restless spoilers, updates and news.