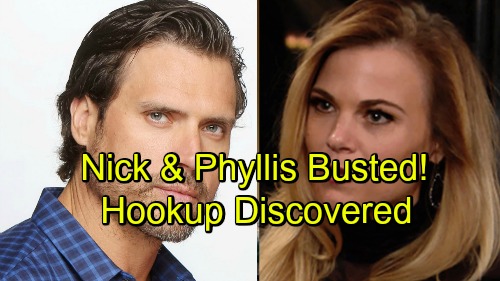 The Young and the Restless (Y&R) spoilers tease that Sharon (Sharon Case) and Nick (Joshua Morrow) will face more conflict. Sharon just won’t be able to deal with this new side of her fiancé. She doesn’t like the person Nick’s becoming, so it seems she’ll break off their engagement.

Of course, Phyllis (Gina Tognoni) recently threw Billy (Jason Thompson) out over his lies. She made it pretty clear where their relationship stood, but she may make it even clearer soon. “Philly” will be over briefly and so will “Shick.” That means Nick and Phyllis will be free for the night.

After playing video games and opening up a bit, the exes will wake up in bed together. It appears they’ll have too much to drink the night before, so that should be a factor. Nick and Phyllis’ new single status will technically get them off the hook for cheating. However, they’ll still realize this sex session was a huge mistake.

Phyllis and Nick will resolve to put their bedroom blunder behind them. They’ll agree that they want to work things out with their respective partners. The Young and the Restless spoilers say Phyllis and Nick will take steps to make that happen. It probably won’t be long until Nick’s apologizing and showering Sharon with gifts. She truly loves him, so she can’t stay mad for long.

Likewise, Billy can’t go more than a day or two without Phyllis. He’s crazy about her, so it won’t take much to win him over either. Y&R spoilers say Nick and Phyllis will breathe a sigh of relief. They’ll assume they’ve escaped the consequences, but it’s never a good idea to make assumptions in Genoa City. That steamy night will inevitably come back to haunt them.

The Young and the Restless spoilers hint that someone will make a shocking discovery. Another Y&R character will become privy to Phyllis and Nick’s passion, but who will it be? Summer (Hunter King) seems like a great choice here. She’s always lurking, so she could easily overhear the secret.

Plus, Summer’s parents are involved. That’d make this pot-stirring even more fun! Summer has also formed a bond with Billy lately, so you can bet she’d go running her mouth. This might even lead to a Summer and Billy hookup down the road.

As for Sharon, the news will undoubtedly get back to her as well. Sharon’s sure to be furious, so Y&R fans had better prepare for drama. We’ll give you updates as other details emerge. Stick with the CBS soap and don’t forget to check CDL often for the latest Young and the Restless spoilers, updates, and news.