The Young and the Restless Spoilers: Nick and Sharon Make Bold Move for Christian’s Sake – Deliver Crushing Blow to Victor 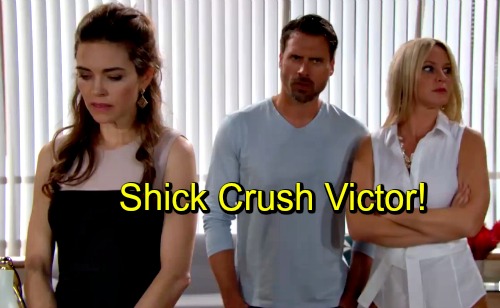 The Young and the Restless (Y&R) spoilers tease that Victor’s (Eric Braeden) world will come crashing down. Thanks to the latest threat, everything Victor’s worked for is in jeopardy. Tuesday’s episode, June 26, brings a shocking expose on Victor’s health. The public will soon believe Victor’s feeble and knocking on death’s door.

Of course, Victor’s clients will be bolting right and left. He’ll do his best to prove he’s handling his health woes, but his medical records aren’t helping his case. This is terrible news for Victor, but it presents an interesting opportunity for his betrayed son. There’s a good chance Nick (Joshua Morrow) will take advantage of it soon enough.

Y&R fans know that Nick needs something he can use against Victor. On Tuesday, Nikki (Melody Thomas Scott) wonders if Victor can really care for a small child. In light of these new developments, Nick may realize a judge would wonder the same thing. He’d be wise to go beyond arbitration and turn this into a very public court battle.

That’s the last thing Victor wants right now, so he might be willing to back down. Sharon’s (Sharon Case) reputation was already demolished in the initial proceedings. The hard part’s out of the way and was kept private. The Young and the Restless spoilers say Nick could move forward with minimal risk to Sharon.

Even if Michael (Christian LeBlanc) drags up the details of her past again, Sharon would be willing to deal with it for Christian’s (Jude and Ozzy McGuigen) sake. However, Victor might not even let it get that far. It’s clear that Newman Enterprises can’t afford any more scandals at the moment.

If Victor stands his ground, he runs the risk of losing Christian and looking like the weak grandpa that he is. A better option would be to hand Christian back over quietly and avoid more public drama. Whatever the case, The Young and the Restless spoilers say Sharon and Nick will make a bold move on new Y&R episodes later this week, June 25-29. They may jump on the health angle and use it to fight for Christian.

Y&R viewers won’t want to miss the rest of the custody mayhem. We’ll give you updates as other details emerge. Stick with the CBS soap and don’t forget to check CDL often for the latest Young and the Restless spoilers, updates, and news.