The Young and the Restless Spoilers: Nick Attacks Father’s Weakness – Can Victor Fully Recover, Is The Moustache’s End Coming? 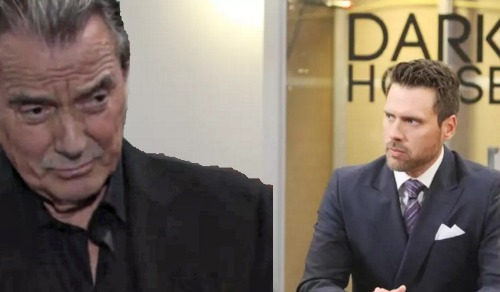 The Young and the Restless (Y&R) spoilers tease that Victor (Eric Braeden) hasn’t fully recovered from the stroke he had and may be facing other health challenges, as Nate (Brooks Darnell) will learn. Generally, regardless of how he was feeling about his father, Nick (Joshua Morrow) wouldn’t have relished The Moustache’s status. But this version of Morrow’s character does.

The radical transformation that Nick is undergoing is noteworthy. Far more than a blue period, where he would be acting out against Victor, Nick has planned with purposeful intent to bring the Black Knight down.

The Young and the Restless spoilers tell us that the conception and execution of Dark Horse intends to topple Newman Enterprises. This plan arguably represents the boldest act Nick has ever taken in his life. The goal is to create a family legacy company which would fulfill the original goal Victor had for Newman Enterprises until he went off-track years ago.

Christian’s (Jude and Ozzy McGuigen) longstanding paternity issue climax served to change the paradigm. Nick decided that he was simply not going to allow his father to manipulate his life and the lives of his children ever again.

The Young and the Restless fans know that in order to defend against him Nick opted to go on the attack, instead of only cutting off contact. That well-worn strategy never lasted for long and didn’t serve to stop Victor’s Machiavellian pattern.

Earlier this year, Y&R showed Victor in varied states of recovery. At times he seemed to be back to his old self. At others, he was laboring to speak, or even maintain a steady balance, as when Michael (Christian Le Blanc) helped him out of Christian’s arbitration hearing.

Braeden responded to fan questions about his real life health via social media when those scenes were shown. He appreciated what were actually compliments, but told everyone that he was fine. Yes, Braeden does play Victor well.

Nick has been poaching a seemingly inordinate number of Newman partners and other business ties. That line of attack followed Nick’s J.T. (Thad Luckinbill) ruse, which was partially intended to damage public confidence in Victor’s company and in the man himself, through the release of his medical records.

Nate was called in by Neil (Kristoff St. John) to serve as Victor’s concierge doctor. That underscored the ongoing seriousness of the Moustache’s condition, with whatever that is.

It’s plausible to believe that Nick will use whatever information he can about all things Newman, including Victor’s health status. The Young and the Restless has made clear that there’s no doubt that Braeden’s character isn’t as vigorous as he once was.

There will come a time when Victor Newman we be no more – the thought of recasting this classic soap icon is absurd. Eric Braeden is 77 years old and despite his good health the time will come when the requirements of being a main star on a daily soap will be more than he will be comfortable with.

Whether Nick can exploit the situation with Victor’s health, that may be temporary, or not, is yet to be determined. But Y&R fans can be certain that the created conflict between this father-son tandem will continue indefinitely.