The Young and the Restless Spoilers: Nick Digs for the Truth – Girls’ Night Gang Exposes J.T.

BY Marcy Cohen on December 17, 2018 | Comments: one comment
Related : Soap Opera, Spoiler, Television, The Young and the Restless 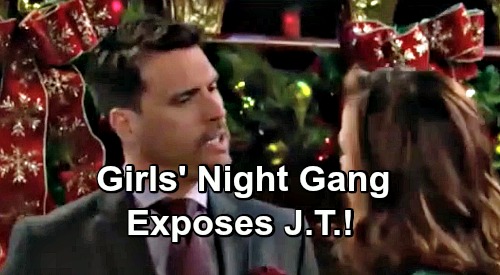 The Young and the Restless (Y&R) spoilers tease that Nick (Joshua Morrow) will seethe over the hit-and-run accident that puts Nikki’s (Melody Thomas Scott) life at stake. He’ll be in pain over the possibility of losing his mother, but he may let anger take over at some point. Sometimes rage is easier to feel than sorrow during a crisis.

Later, Nick’s fury will be channeled into total determination. When Victor (Eric Braeden) remains off the grid, Nick will realize he’s the only one who can look out for the Newmans right now. The Young and the Restless spoilers say Nick will vow to defend his family no matter what. He’ll take precautions and plan to do whatever it takes to keep his loved ones safe.

Thanks to the recent Y&R fire and the evidence that surfaced against Victor, the cover-up crew will worry that this was their tormentor’s latest message. Victoria (Amelia Heinle), Sharon (Sharon Case) and Phyllis (Gina Tognoni) will discuss the idea that someone – like J.T. (Thad Luckinbill) – is plotting each of their murders.

If Phyllis plants an idea like that in Nick’s head, he may start digging around. She probably wouldn’t mention the J.T. part, but she might hint that they have to protect themselves. Phyllis could frame it as anyone connected to the Newman clan becoming a target. She’s linked to the Newmans through him.

Of course, Phyllis might just blurt out something about protection in a vulnerable moment. The cover-up club has worked hard to keep their secret under wraps, but emotions will be all over the place on this week’s new Y&R episodes, December 17-21. None of them will be thinking straight due to Nikki’s dire condition, so mistakes could be made.

Even if Nick doesn’t get tipped off just yet, he won’t rest until his family is no longer under attack. Since someone is clearly out to get the girls’ night gang, Nick’s mission could prove dangerous. If he follows the trail and puts the puzzle pieces together, he could figure out the truth behind J.T.’s death.