The Young and the Restless Spoilers: Nick Gets Christian Back, But Adam Newman Returns for His Son – Brothers Battle It Out 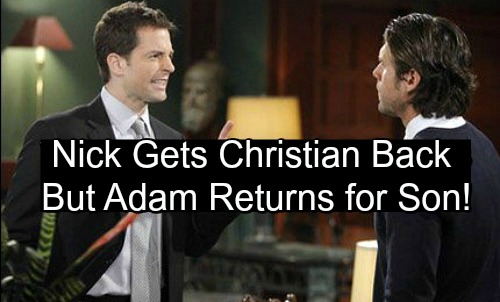 The Young and the Restless (Y&R) spoilers tease that Victor’s (Eric Braeden) victory will be short-lived. He’ll gloat about winning the custody battle, but we all know Y&R’s setting him up for a huge fall. One way or another, Victor will have to give Christian (Jude and Ozzy McGuigen) back. It doesn’t make sense that he scored custody in the first place, so they’re not going to let this decision stand.

Whether Brittany (Lauren Woodland) plots a sneak attack or Nick (Joshua Morrow) pulls it off with some sabotage, Christian should return to his home eventually. Sharon (Sharon Case) and Nick may face some ups and downs thanks to all the drama, but let’s hope they can work it out. “Shick” deserves a bright future and it’d be great to see the family together again.

The Young and the Restless spoilers say Nick and Sharon could get another shot at a happy ending. Once Christian is back under their roof, they could let their guards down and enjoy some bliss. Sharon and Nick might feel like everything’s going to be OK, but that obviously wouldn’t be the case. There’s always more trouble ahead on Y&R!

Even if Victor is stymied for a while, other threats could be looming. Naturally, Christian’s biological father could be one of them. Will Adam Newman return to claim his boy? He might be appalled by the custody battle news and suggest that he’s the only one capable of protecting Christian. Adam could argue that Victor will just keep stirring things up and Nick clearly can’t handle it.

Plus, Adam may not be able to track Chelsea (Melissa Claire Egan) and Connor (Gunner and Ryder Gadbois) down. He might blame both Victor and Nick for making him lose his family. With that in mind, Adam may want his other son back. It could be a way of inflicting pain as well as easing some of his own.

Would you like to see Adam Newman return for Christian? Do you want to see Michael Muhney reprise the role or should Y&R recast? We’ll give you updates as other Young and the Restless details emerge. Stay tuned to the CBS soap and don’t forget to check CDL often for the latest Young and the Restless spoilers, updates, and news.