The Young and the Restless Spoilers: Nick Investigates Rey – Seeks Dirt On Rival For Sharon’s Heart 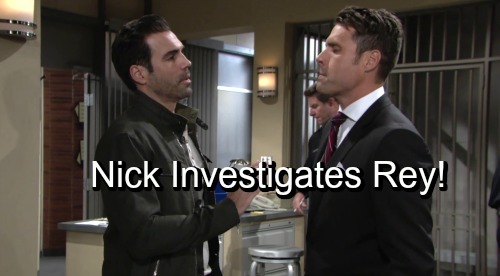 The Young and the Restless spoilers tease that Nick (Joshua Morrow) will get the jealousy bug when it comes to Sharon (Sharon Case) and Rey (Jordi Vilasuso). Nick wasn’t too happy when he found Sharon at Rey’s apartment enjoying a food fight with Rey and Lola (Sasha Calle), and he suspects that Rey is out to win Sharon’s heart.

Of course, what Nick doesn’t know is that Rey is indeed trying to get closer to Sharon, but not necessarily to win her heart. Rey wants to exploit his relationship with Sharon for the purposes of his J.T. (Thad Luckinbill) investigation. But Nick assumes that Rey’s got a romantic interest in Sharon, and it irks him beyond belief.

Nick truly believes that he can win Sharon back if unencumbered by Rey, but Rey’s not going to back down. He’s got a job to do, and he’s determined to get to the bottom of the J.T. mystery. Y&R spoilers say that the two men will square off and Nick will let it be known in no uncertain terms that he’s going to reconcile with Sharon and that Rey needs to back off.

But when that doesn’t work, it looks like Nick will take it upon himself to learn more about his enemy. Nick will want to do some digging and figure out exactly where Rey came from and what his story is. Perhaps he’ll hire a private detective to look into Rey’s background. That might lead Nick down an interesting path, since viewers know that there are some mysteries surrounding Rey’s past.

First off, we know that Rey has a wife somewhere. Things appear to be strained between them, but Nick will probably be interested to know that the man who seems so interested in Sharon is married. Nick may uncover the reason for Rey and his wife’s estrangement, and he may think that if he shares all of this with Sharon, then Sharon will no longer be interested in Rey.

There’s also another mystery that appears to be a larger Rosales family mystery. Rey, Arturo (Jason Canela), and Sasha have danced around the topic of something that happened in their past, but they haven’t named what it is. It’s clearly something serious that the three of them don’t want to talk about. Nick may uncover this secret in his Rey research and use it against Rey somehow.

No matter what Nick finds, it’s unlikely that it will have much of an effect on Sharon’s feelings toward him. She really seems to be done with Nick, but what she can’t tell him is that her interest in Rey revolves around keeping in the loop on the J.T. investigation, so Nick will probably go on believing that there’s a romantic spark between Sharon and Rey.

What do you think Nick will find when he investigates Rey? Stay tuned to the CBS soap and don’t forget to check CDL often for the latest Young and the Restless spoilers, updates, and news.