The Young and the Restless Spoilers: Nick Jealous Over Rey’s Relationship With Sharon – Squares Off With Rey 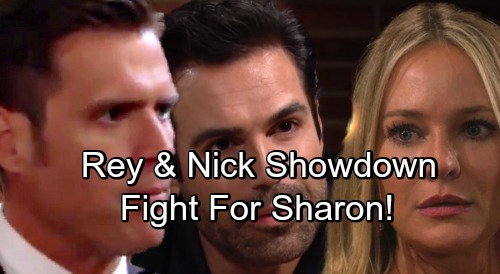 The Young and the Restless spoilers tease that Nick (Joshua Morrow) is not about to give up on Sharon (Sharon Case). He will remain hopeful that he can get through to her and repair their broken relationship, but Sharon doesn’t seem at all receptive to him. In Sharon’s mind, she’s done with all the lies and the false promises.

Sharon will do her best to go on with her life. She’s got Crimson Lights and her job at the police station, and it looks like she’ll put her energies there. Of course, that means filling Rey (Jordi Vilasuso) in on what’s gone down between her and Nick. Sharon’s pretty careful around Rey because he’s investigating the J.T. (Thad Luckinbill) matter, but it looks like she may let her guard down bit.

Rey will even agree to talk to Sharon at Nick’s request to see if forgiveness may be an option. But Y&R spoilers say that Sharon will shut down any talk about forgiveness. As far as she’s concerned, Nick has been given enough chances in the past and he just keeps making the same mistakes over and over. Sharon will maintain that she’s done and moving on.

But it looks like Rey will eventually manage to lift Sharon’s spirits a bit. She’ll end up visiting Rey’s apartment above Crimson Lights, and somehow a paint war will ensue. Lola (Sasha Calle) will be involved as well, and maybe Sharon will be able to laugh a little and release some of the tension she’s been carrying around.

In fact, it may be the start of a budding relationship for Sharon and Rey. Rey will be trying hard in the near future to get Sharon to open up, partly because he likes her, but mostly as part of his J.T. investigation. Chances are, he’ll use Sharon’s breakup with Nick to get closer to her. She’ll need a friend and confidante, and he’ll probably position himself as that person.

But Nick’s going to be keeping an eye on Sharon. How long until he starts to notice the closeness developing between Rey and Sharon? He probably won’t be too happy about that, especially since he considers Rey a friend. But of course he doesn’t know that Rey’s got an ulterior police-related motive when it comes to Sharon.

Y&R spoilers say that Nick and Rey will soon square off, and that Nick will confront Rey about something. Chances are, it will be about Sharon and what he thinks might be going on between the two of them. Nick may feel like Sharon is vulnerable from their breakup and that Rey is moving in. He may accuse Rey of trying to take advantage of Sharon.

Do you think that Sharon and Rey will get closer now that she and Nick are kaput? Stay tuned to the CBS soap and don’t forget to check CDL often for the latest Young and the Restless spoilers, updates, and news.