The Young and the Restless Spoilers: Nick Offers Summer a Bribe – Tries To Save Philly and Shick 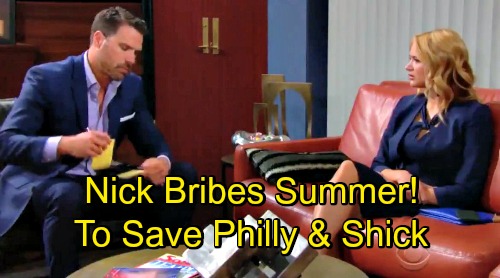 The Young and the Restless spoilers tease that Summer’s (Hunter King) realization of her mom’s one-off with Nick (Joshua Morrow) fuels what could be two relationship enders. Philly and Shick could easily collapse if King’s character doesn’t stay silent.

Summer has created trouble since storming back to town in the sports car she stole from her boyfriend. Y&R’s intent to transform the formerly soft character into a me-first personality type has been evident. Along with that comes the current threat.

Phyllis (Gina Tognoni) has been with Billy (Jason Thompson), off and on, for approximately two years. Billy believes that Philly is solid, while not knowing about Phick’s recent, impulsive revival.

Billy veered off-course this summer because of the same-named young lady who lured him back to gambling. Phyllis and Nick’s daughter ginned that angle for a two-fold reason. Summer believes that her mom should have never booted Jack (Peter Bergman) and she’s decided that Billy is desirable.

The claim Summer made to Kyle (Michael Mealor), that she doesn’t want a relationship with Billy, but just some fun, is questionable. Jack’s son pushed matters by suggesting a bet. If Summer gets Billy she’ll also win Kyle’s car. If Kyle is right and Silly is just a fantasy, then he reclaims Syle. Would that be a victory young man?

Phyllis was stunned to not only learn that Summer knew about Phick’s recent dalliance, but that her daughter wants to expose said information. The building tension is fueled through the feelings Summer has hidden from her mother.

Philly faces its other survival threat the instant Phyllis learns that Billy has concealed her daughter’s aggressively flirtatious behavior. There is no rational explanation for him having done that, other than Y&R wanting to further this particular storyline that various fans find unseemly.

And then there’s dark Nick. That would be the new character Morrow is playing, a riff on the version he’s embodied since 1994. As savvy readers of this comprehensive site know, Y&R accepted Morrow’s pitch to take Nick low.

Summer’s dad, after having been informed of his daughter’s actions, offers her a bribe in the form of a check. She’s put off by the act and unlike most children isn’t happy that her parents might be opening an opportunity to get back together.

Shick intends to get remarried this fall. Philly believes that a similar official link is nearing as well. But both couples could easily be upended by Summer, whose return to Genoa City hasn’t been smooth, which is just as she intended.