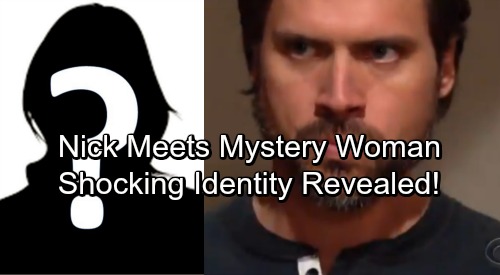 The Young and the Restless (Y&R) spoilers reveal that Nick (Joshua Morrow) will make a shocking discovery in the week ahead, April 9-13. He’ll learn the identity of the mystery woman who stopped by Victor’s (Eric Braeden) room. Alyssa London booked the gig because the show liked the look of her hair. They needed a way to tease what’s coming up, which could be a big return.

Will Victor’s former flame be the one who visited him? It’s possible that Dr. Meredith Gates (Alicia Coppola) popped in and will be exposed soon. She fell for Victor thanks to all his trips to the prison infirmary, so maybe she could never quite shake her love for him.

Of course, this could also be someone else we’ve never met. Victor has plenty of secrets, so just about anybody could emerge with a stunning story to tell. However, it seems more likely that this is someone Nick’s familiar with. The Young and the Restless spoilers say Nick may recognize her, so it’ll be interesting to see how their encounter goes.

In the end, this woman’s identity may not even matter all that much – at least not in terms of the story. Perhaps this is really about throwing in a little twist and having someone in the right place at the right time. In J.T.’s (Thad Luckinbell) case, it could be the wrong place at the wrong time!

What if this mystery woman saw something J.T. didn’t want her to see? Y&R spoilers say J.T.’s crimes will be uncovered this week, so this lady could play a role in the big reveal. If she happened to see J.T. turn off Victor’s life support, that could lead to trouble. Even if she just saw J.T.’s exhibiting strange behavior, she might be able to point him out to Nick and stir up suspicions.

Regardless, J.T.’s going down in a big way. The Young and the Restless spoilers hint that J.T. will probably be killed off. The weekly promo pretty much gives it away, so be prepared. It makes sense after Victoria’s (Amelia Heinle) abuse and two attempts on Victor’s life. In the soap world, truly wicked characters often suffer grim fates.

Victoria herself may be the one to take J.T. out, so be sure to tune in for all the drama. We’ll give you updates as other Y&R news comes in. Stick with the CBS soap and don’t forget to check CDL often for the latest Young and the Restless spoilers, updates and news.