The Young and the Restless Spoilers: Nikki Grants Victor Ashley As His Mistress – Is Y&R Turning Niktor Into Swingers? 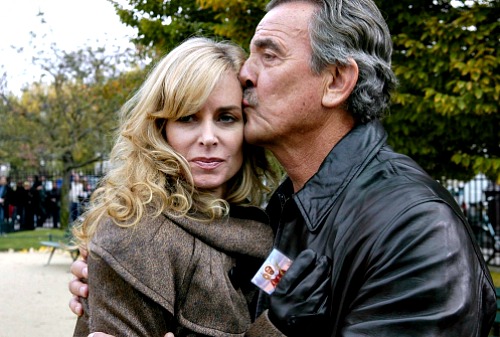 The Young and the Restless spoilers tease that Nikki (Melody Thomas Scott) will convince Ashley (Eileen Davidson) that her revived marriage with Victor (Eric Braeden) is nothing more than a mutual arrangement, instead of a renewed romance. Victor will also be told that he’s also free to pursue an all-out relationship with Ashley if he so desires. But will Scott’s character eventually be revealed as playing a role as part of a bigger game she may not be aware of?

Nikki and Victor recently admitted to each other that they do love each other. However, their negotiated separation resolution was conducted like a corporate deal at the ranch. Niktor sat in the living room, without legal counsel, and worked out the details that led to their public reconciliation.

The long-time couple, which includes many off-and-on periods of divorce and separation, felt it best for their family and the family business to present a united front. So Nikki would move back to the Ranch, Victor agreed to donate a significant amount of money to a causes Nikki favored and some other personal matters were smoothed over. No hugs, kisses, flowers, or overseas jaunts were appropriate in this most recent reconciliation. It was a cold business decision.

While the last two paragraphs were true, one wonders if Nikki will eventually feel the old jealously pangs if, in fact Victor and Ashley do engage in romance under her nose? Consider Vashley spending a night together at the Ranch, for instance.

This scribe believes that Nikki was sincere in telling Ashley that it’s okay if she pursues Victor. Nikki is theoretically considering how she plans to live the rest of her life. She wants access to all of the good things that come by living in the same home as Victor and in having access to social power by remaining Mrs. Victor Newman.

However, many instances of past history have demonstrated that Nikki and Victor become jealous of each other whenever either half of Niktor is with another person. So if Victor does work his way past Ashley’s defenses and proceeds to have another go at a relationship with her, then Nikki will face the reality of her husband being with another woman.

This assumed situation will be different the various past instances, including ones with Ashley, because Nikki will have preapproved of Victor’s dalliance. But hardcore viewers would think that Mrs. Newman would have, by that time, secured her own boyfriend as well.

Executive producer and head writer Mal Young can’t possible be writing Niktor toward swinger status, can he? That would be odd, even for Genoa City. So, let’s assume that Nikki is simply following her business plan. Let’s see what happens from there, be it Victor with Ashley, or with whoever.