BY Marcy Cohen on April 18, 2018 | Comments: one comment
Related : Soap Opera, Spoiler, Television, The Young and the Restless 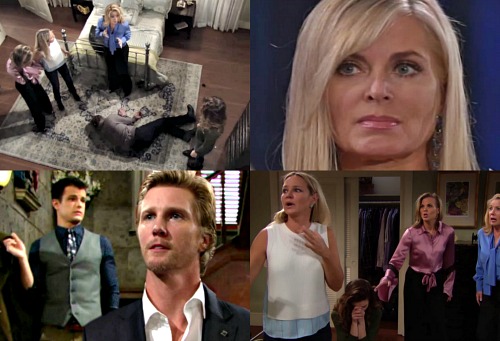 The Young and the Restless (Y&R) spoilers tease that another shocking shakeup’s ahead at Newman. After Victoria (Amelia Heinle) framed Ashley (Eileen Davidson) and deceived Victor (Eric Braeden), she faced a humiliating demotion. Ashley eventually took over since Victor’s recovering from J.T.’s (Thad Luckinbell) attacks. However, she’d better not get too comfortable in that position of power.

Another major change is brewing and it’ll affect Newman’s leadership. This could actually have something to do with what’s playing out at Jabot. In Wednesday’s new Y&R episode, April 18, Ashley (Eileen Davidson) works hard to beat Kyle (Michael Mealor) at the board meeting. Jack (Peter Bergman) ultimately shows up to spoil Kyle’s plot, so this family feud’s about to spiral out of control.

Y&R fans will recall that Victor and Kyle’s secret partnership was exposed. It’s clear that Victor intended to make some power plays at Jabot, but that’s not what Ashley had in mind. Victor may sense that Ash can’t be a loyal soldier. He might decide he’d be better off with a Newman running the show.

Victoria already screwed up and she’s too fragile to take charge thanks to the J.T. drama. Nick (Joshua Morrow) certainly doesn’t want to sit on the throne and it’s not like Victor really trusts him anyway. Like Ashley, Abby (Melissa Ordway) also has Jabot’s best interests at heart. She can’t be completely devoted Newman, so she’s out of the running.

Who does that leave? Someone surprising! The Young and the Restless spoilers say Victor will name Nikki (Melody Thomas Scott) the interim CEO of Newman Enterprises. She’ll stun everyone when she delivers the big news.

Of course, this decision could lead to serious trouble. Ashley isn’t going to be happy about it, but she may try to stick it out at first. However, Jack could argue that he needs Ashley more than ever. They have to stop Kyle and Victor from destroying John’s (Jerry Douglas) legacy.

Jack could add that he told Ashley this would happen. Victor will never treat her like a real team player, so she might as well head back to Jabot. That would allow Ashley to play dirty. If Nikki carries out Victor’s wishes and supports Kyle’s ideas, it could put a target on her back.

Will Ashley dig for secrets to spark a scandal? That’d be a good way to put a serious dent in Newman’s business. They’ve had a ton of scandals already, so the next one could put them on the edge of destruction!

As luck would have it, Nikki has a juicy new secret. She killed J.T. and covered it up with a little help. Will Ashley hire a private investigator and learn the truth? Could she simply eavesdrop and figure it out herself? Regardless, it’d be interesting for Y&R to put this secret in dangerous hands.