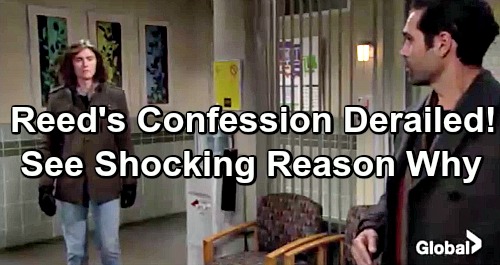 The Young and the Restless (Y&R) spoilers tease that Reed’s (Tristan Lake Leabu) guilt will lead him to a big decision. As Nikki’s (Melody Thomas Scott) condition declines, Reed will feel terrible about his family’s suffering.

Victoria’s (Amelia Heinle) pain will be particularly hard on him. Since Reed’s responsible for the hit-and-run accident, he blames himself for Nikki’s nightmare and his mom’s sorrow.

Reed will ultimately decide that he can’t take it anymore. At the hospital, he’ll seek out Rey (Jordi Vilasuso) and ask if they can talk. When Reed first came home, he wanted to dig for answers about J.T.’s (Thad Luckinbill) murder investigation.

He’d still like those answers, but Nikki’s ordeal has become his priority. Y&R spoilers say Reed will plan to make a full confession, but some snags will get in the way.

Rey will likely brush the teen off for now, especially since Nikki will be kidnapped from the hospital on new Y&R episodes this week, December 24-28. The detective may be too busy to listen. The Young and the Restless spoilers say Reed will chicken out a time or two as well.

Of course, Charlie (Noah Alexander Gerry) will be breathing down his neck throughout all this. His car was the one that mowed Nikki down, so he’ll grow increasingly worried.

However, Reed will ultimately make a confession during the week of December 31-January 4. Who will be on the receiving end of it? Reed might divulge the truth to Victoria and give her another major secret to keep. Since she’s keeping something so huge under wraps, Victoria may feel too guilty to let her son come clean to the cops.

If Victoria suddenly acts like Rey shouldn’t or won’t be able to find the hit-and-run driver, it’ll just raise his suspicions even more. Rey may think the Newmans have something else to hide, which isn’t a good thing right now. The walls are already closing in on Victoria and the rest of the cover-up crew.

Then again, Billy (Jason Thompson) might hear the shocker and push Reed to do the right thing. Reed might even bypass his family and just tell Rey like he planned before. Regardless, this will stir up more Newman drama. Rey seems determined to bring down someone tied to this family, so he could be especially hard on Reed when the real story’s revealed.