The Young and the Restless Spoilers: Perfect Time for Chelsea’s Return and Redemption – Shick’s Ruin Pushes Nick Down Another Path 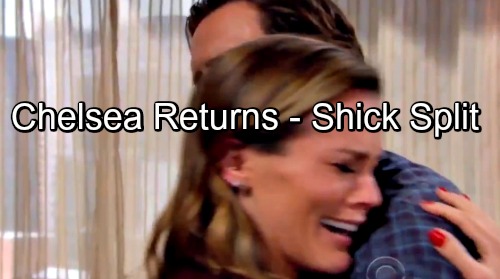 The Young and the Restless (Y&R) spoilers tease that Nick (Joshua Morrow) and Sharon’s (Sharon Case) romance is almost ready to explode. Trust is an important part of any relationship, but these two just don’t have it. Sharon has been battling doubts ever since Nick took a dark turn. She’s moving forward with him anyway, but that doesn’t mean she can ignore her worries.

Of course, we also have to acknowledge the huge secrets between them. Nick already came clean about his J.T. (Thad Luckinbill) impersonation plot, which was a real blow to this couple. It was tough for Sharon to wrap her head around such a hurtful lie. Nick also hooked up with Phyllis (Gina Tognoni) and kept quiet about it, so they’ve got another shocker hanging over them.

In fact, Sharon’s deception kicked off her latest reunion with Nick. She suggested that her nervousness was about her attraction to him, but that wasn’t the whole story. Tessa (Cait Fairbanks) also pushed Sharon to cover up the attack at Crimson Lights, so that’s still a secret as of right now. It’s easy to see that “Shick’s” house of cards is destined to topple.

The Young and the Restless spoilers say Sharon and Nick’s wedding could turn into a total disaster. Once some of these bombs drop, they may both walk away single. Rey (Jordi Vilasuso) seems poised to be Sharon’s next love interest, but what about Nick? Who will he fall for after Sharon?

Phyllis could be an option since her relationship with Billy (Jason Thompson) is also on the rocks. However, Jack (Peter Bergman) appears to be the better option for her. That means we may need someone else for Nick to end up with. Perhaps another ex could reenter the picture.

In an interview with TV Insider, Mal Young insisted we haven’t seen the last of Chelsea (Melissa Claire Egan). If Y&R’s head writer and executive producer says that, fans had better believe a comeback’s brewing eventually. Of course, there’d be some hurdles for Chelsea and Nick to get past. She deceived him as well, but Nick’s got a forgiving heart and could undoubtedly let all that go.

With Sharon, there are years of wounds between them. She may not be quick to forgive that one-night stand with Phyllis, so Nick may have to move on. Bringing Chelsea in after the “Shick” blowup would be a smart move. Once The Young and the Restless has Chelsea and Nick back on track, they could finally unleash an Adam Newman recast on Genoa City!

Do you think the time is right for Chelsea’s return? Could Y&R be setting that up now? Should Chelsea come home, redeem herself and get back together with Nick? We’ll give you updates as other news comes in. Stay tuned to the CBS soap and don’t forget to check CDL often for the latest Young and the Restless spoilers, updates, and news.