The Young and the Restless Spoilers: Phyllis Discovers Sinead-Kyle Connection – But Comes Too Late To Save Billy 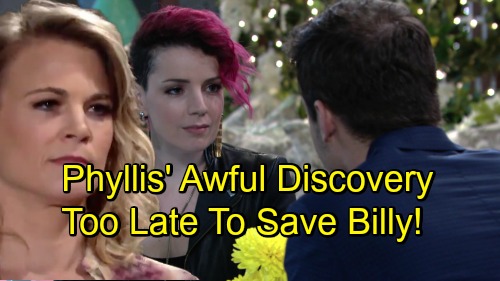 The Young and the Restless spoilers tease that Phyllis (Gina Tognoni) will remain skeptical of Sinead (Lira Kellerman) and her influence over Billy (Jason Thompson) as their poker weekend in Las Vegas continues. Sinead seems to be there at every turn, pushing Billy’s buttons and luring him into “just another game.”

Phyllis can’t quite place her finger on it, but she knows that something’s amiss with Sinead. Of course, viewers know that Kyle (Michael Mealor) is paying Sinead handsomely to lure Billy back into his gambling addiction. The goal? Make Billy a total mess so that he screws something up at Jabot, paving the way for Ashley (Eileen Davidson) to take back the Jabot reigns.

Chances are, Phyllis will eventually start to do a little digging into the Sinead situation. But will she put two and two together and realize that Sinead’s a pawn in Kyle’s sinister plot to take Billy down? Phyllis is pretty sharp, so she just might figure it out.

But will Phyllis uncover Kyle’s little plan before Billy actually does screw something up at Jabot as a result of his gambling? Kyle will probably want Sinead to keep working on Billy, even after he returns to Genoa City. And that’s where Billy could be tempted to continue his gambling in secret, possibly even using Jabot funds to do so.

Phyllis doesn’t realize it, but she needs to work fast to get to the bottom of the Sinead/Kyle connection. Soon, Billy will be back in the local Genoa City poker scene, and it will be much harder to pull him out before he does something that jeopardizes his position at Jabot. Kyle and Ashley are just waiting for Billy to slip up, and it will only be a matter of time until he does.

Do you think Phyllis will discover what’s going on in time to save Billy from losing his position at Jabot? Stay tuned to the CBS soap and don’t forget to check CDL often for the latest Young and the Restless spoilers, updates, and news.