BY Kinsley Goldman on May 18, 2018 | Comments: one comment
Related : Soap Opera, Spoiler, Television, The Young and the Restless 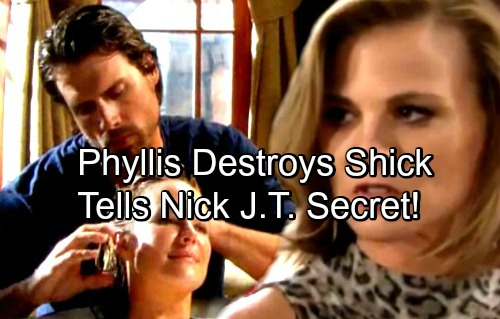 The Young and the Restless (Y&R) spoilers tease that Nick (Joshua Morrow) will decide he needs some guidance. His friendship with Phyllis (Gina Tognoni) has grown stronger lately, so he’ll think she’s a good person to turn to. It seems Nick may need the female perspective for his problem. He believes Phyllis and Sharon (Sharon Case) have gotten chummy thanks to girls’ night, so that’ll be important here.

As of Friday’s Y&R episode, Nick and Sharon (Sharon Case) are moving forward as a couple. They’re ditching sexy fun for a real reunion, so Nick may want some advice regarding his relationship. He might plan on purchasing a special gift for Sharon as a way to celebrate. Then again, this could be about Nick’s fears. He might worry about messing this up and urge Phyllis to weigh in with tips.

After all, Phyllis and Billy (Jason Thompson) are pretty solid. They manage to keep the spice in their love lives as well. Nick might think they’ve got the right idea, so that’d be a great reason to ask Phyllis for help. Whatever the case, Phyllis probably won’t be happy about this news. She’s been distracted by all the J.T. (Thad Luckinbill) drama lately, but she may resume her plan to push Nick and Sharon apart.

The Young and the Restless spoilers say Nikki (Melody Thomas Scott) will be upset over this reunion, too. She’ll feel like Nick’s (Joshua Morrow) only going to get hurt again. Nikki is always going to be protective of her son, so she wouldn’t might if Phyllis sabotaged this romance. However, that plot could lead to some tough choices. Breaking up Sharon and Nick could involve taking a huge risk.

There’s a surefire way to cause relationship drama and that’s sharing the cover-up secret. Sharon has lied to Nick repeatedly, so exposing her deception would stir up old trust issues. Will Phyllis consider telling Nick the truth? She might determine that Nick would never turn in his abused sister and his mom who defended her. Victoria (Amelia Heinle) and Nikki aren’t to blame for what happened.

Of course, there’s also a chance that Phyllis won’t really think this through. She might blurt out the real story in a moment of desperation. Phyllis could regret it afterward, but there’d be no turning back. The Young and the Restless spoilers say the secret will indeed be revealed to someone soon. Phyllis just might be responsible!

Do you think Phyllis will blab to Nick and destroy Sharon’s dreams? We’ll give you updates as other Y&R details emerge. Stay tuned to the CBS soap and don’t forget to check CDL often for the latest Young and the Restless spoilers, updates, and news.