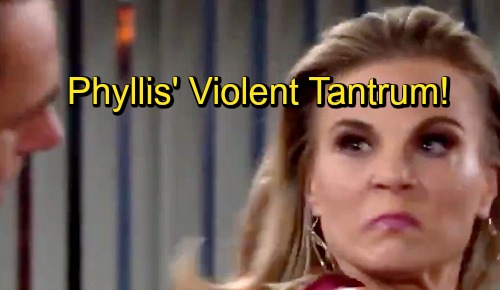 The Young and the Restless (Y&R) spoilers tease that Billy (Jason Thompson) will return from rehab this week. That must’ve been some program if his gambling addiction is already under control! However, most Y&R fans won’t complain about that. It’ll be nice to have Billy back in the action, especially since there’s another huge secret to reveal.

Billy was furious after he found out about Phyllis’ (Gina Tognoni) hookup with Nick (Joshua Morrow). Phyllis and Billy weren’t together at the time, but he still considered it a deep betrayal. To be fair, their breakup was short-lived.

Billy undoubtedly feels like Phyllis should’ve given him a chance to cool off. She knows this is what they do! They fight like cats and dogs before ultimately getting back together – with loads of make-up sex, of course. Unfortunately, finding their way back to each other won’t be as easy this time around. That’s because of what happened following their split.

Now that Summer’s (Hunter King) had a little taste of Billy in bed, she’s even more obsessed than before. Part of Summer seems to like the appeal of sexy men who are older than her. Another part of her just wants to hurt Phyllis and make Billy her conquest.

Naturally, Kyle’s (Michael Mealor) relationship with Lola (Sasha Calle) is a factor as well. Summer can see that Kyle’s moving on, so she’ll be desperate to make things work with Billy. She’ll want to feel like something’s going right for her, too.

Billy won’t feel the same way at all, so he’ll have to break the news to Summer. When she shows up at Jabot, Summer will push Billy to admit there’s a spark between them. She enjoyed their sex session and she’ll believe Billy did as well. Billy may not deny that it left him satisfied, but he’s just not in love with Summer. He has no real feelings for her, so he won’t want to take this any further.

Billy will confess that he wasn’t thinking clearly that night. He wanted to hurt Phyllis and what better way than sleeping with her own daughter? Billy will regret using Summer, so he’ll apologize and hope to let her down gently. Summer won’t be quick to accept any of this, so it’ll lead to an argument. She’ll think Billy’s simply denying what he feels for her.

The Young and the Restless spoilers say Billy will ultimately spell it out. He’ll bluntly suggest that it was sex and nothing more. Summer’s not going to be his girlfriend. Period. Alas, Phyllis will arrive at the worst possible moment. She’ll overhear Billy and Summer discussing their passionate night together, so you can bet she’ll hit the roof!

It sounds like some explosive conflict’s coming up. The Young and the Restless spoilers say Phyllis will unleash her wrath like never before! Billy and Summer are going to pay the price for what they’ve done. We’ll give you updates as other Y&R details emerge. Stay tuned to the CBS soap and don’t forget to check CDL often for the latest Young and the Restless spoilers, updates and news.