BY Sean O'Brien on August 21, 2018 | Comments: one comment
Related : Soap Opera, Spoiler, Television, The Young and the Restless 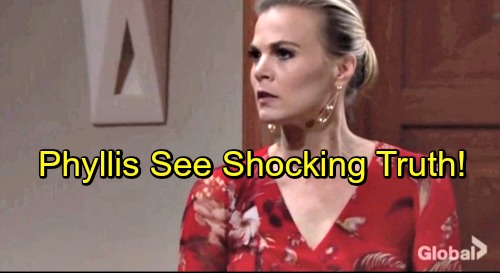 The Young and the Restless spoilers tease that Phyllis (Gina Tognoni) will have her fears confirmed. Yes, Summer (Hunter King) is after Billy (Jason Thompson). The reasons for this attempted smash and grab are deep-seated.

Summer will believe that Kyle (Michael Mealor) betrayed her trust. But that misguided logic doesn’t fit with the games she’s been playing with him, Billy, and her mother for months.

Kyle felt compelled to tell Phyllis what’s been happening. She pounced on that information and later struck Summer across her face, which served as the flashpoint climax to the now realized mother-daughter war.

Y&R took a gamble in writing King’s character hard. Prior to her approximate two-year absence from the cast, during which she was appearing on the still-in-production Life in Pieces, Summer was generally a kind-hearted soul. King remained on Y&R’s cast list during that time, affirming the two-time (2014, 2015) Daytime Emmy Award-winner’s favored status.

Within their interconnected plot lines, Summer has assumed the personality type her mother used to possess. Viewers know that Michelle Stafford’s Phyllis dialogue was far courser than Tognoni’s has been.

So, the established confrontation between 2019’s version of this mother and her daughter can be thought of as the genetic core of Phyllis and the environment Phick created combining to influence Summer’s behavior. Though free will reason places responsibility on Phick’s lone offspring.

Nick (Joshua Morrow) recently provided his first-born daughter with a large check. Billy walked into his Jabot office as those characters were negotiating. Summer played it off as Nick helping her to cover debts, which Billy bought.

In actuality, Nick was attempting to silence his daughter through what he thought was a one-time bribe. Away from her dad, Summer later said that she received a first payment. That implied her plan was to blackmail Nick indefinitely in order to remain quiet about Phick’s one-off.

Kyle was the person who helped Summer coordinate the time lines that placed Nick in her condo with Phyllis a few weeks ago. Summer originally thought her mom and Jack (Peter Bergman) were getting back together, which is what she was hoping for. The realization that Phick might be reforming tapped a dark emotional reservoir.

Summer recently told Phyllis and Nick that her existence only happened because they were serial cheaters, a fact neither denied. Thus, Summer’s intent on damaging Philly and not wanting Phick to revive was exposed and explained. Now, her parents are about to deal with the full fallout their daughter intends.