BY hellodrdavis on August 20, 2018 | Comments: one comment
Related : Soap Opera, Spoiler, Television, The Young and the Restless 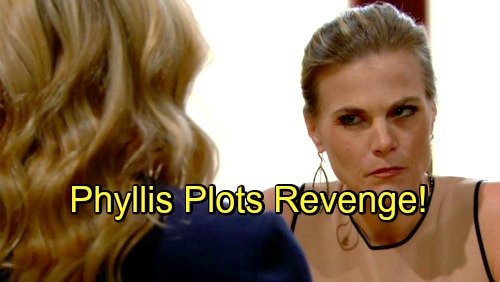 The Young and the Restless (Y&R) spoilers tease that Phyllis (Gina Tognoni) is going to reach her limit with Summer (Hunter King). Summer has been nothing but trouble for Phyllis since she returned to Genoa City, and lately Summer has really been pushing her mom’s buttons. But Summer really crossed the line when she nearly spilled the beans to Billy (Jason Thompson) about Phyllis’ one-night stand with Nick (Joshua Morrow).

Of course, Phyllis knows that Summer’s only keeping her mouth shut because Nick paid her off. And Phyllis suspects that Summer has more plans to make her life miserable. Phyllis has even pondered the possibility that Summer may be after Billy, but she dismissed the idea as too far-fetched. Viewers know that this is exactly what Summer is up to; it’s her goal to get Billy in bed asap.

Kyle will even tell Phyllis some specifics about Summer’s plan – namely, that Summer is on her way to Philadelphia to surprise Billy in his hotel room. All of this will enrage Phyllis, who will see Summer’s actions as a deliberate and calculated betrayal.

But what will Phyllis’ rage lead her to do? Chances are, she’ll end up in Philadelphia to confront Summer and stop Summer’s hot pursuit of Billy. The Young and the Restless spoilers say that Phyllis will plot her revenge, so it sounds like she may have more in store for Summer than simply tracking her down in Philly for a heated confrontation.

It could be tricky to get revenge on Summer, though, since Summer knows about Phyllis’ one-night stand with Nick. Sure, Summer’s been paid off in exchange for her silence, but she’s liable to spill the beans anyway if she gets mad enough. Maybe Phyllis will do something sneaky and behind-the-scenes to get Summer fired from Fenmore’s. Or perhaps she’ll concoct a more devious revenge plan.

At any rate, it sounds like Phyllis is going to do something shocking to get back at Summer. What do you think it will be, and how far will Phyllis go? Stick with the CBS soap and don’t forget to check CDL often for the latest Young and the Restless spoilers, updates, and news.