BY Marcy Cohen on July 11, 2018 | Comments: one comment
Related : Soap Opera, Spoiler, Television, The Young and the Restless 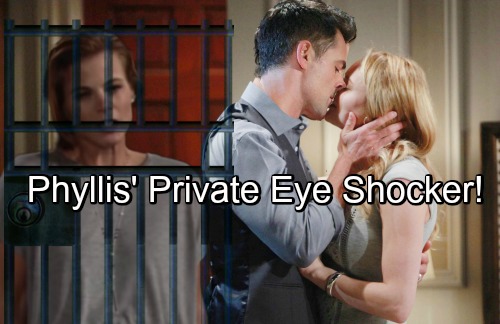 The Young and the Restless (Y&R) spoilers tease that Phyllis’ (Gina Tognoni) worst fears could come true. In fact, she may play a role in sparking Billy’s (Jason Thompson) betrayal! In Wednesday’s episode, Phyllis catches Billy in a lie about his whereabouts and suspects he’s cheating. Hilary (Mishael Morgan) suggests contacting a private investigator and that’s most likely what Phyllis will choose to do.

Of course, Phyllis’ mind is jumping to the worst-case scenario. Billy’s still deceiving her, but he’s not out sleeping with another woman – at least not yet! Instead, Billy’s falling down the slippery slope of gambling. He got a little taste of it thanks to Summer and it seems that addiction took hold again. Billy lost the yacht, so he had to join another poker game in hopes of winning it back.

Billy’s gambling is still a damaging secret, but it’s certainly not as bad as having sex behind Phyllis’ back. She’d likely be relieved if she knew what he was actually doing. Unfortunately, this Young and the Restless investigation could point Phyllis in a surprising direction. She could once again make some wrong assumptions and set major drama in motion.

Y&R fans know Summer and Billy have been spending a lot of time together lately. Now that Phyllis is suspicious of Billy’s behavior, she’s bound to start keeping a closer eye on him. Phyllis may notice Billy and Summer’s strange bond. They’ve had a little secret pact going on, so that’s naturally forced them to interact often.

For most of the evening, Summer’s with Phyllis while Billy’s missing on Wednesday. As a result, Phyllis will assume Billy’s betraying her with someone else. However, Phyllis may suspect Billy has multiple partners eventually. Perhaps the private investigator will spot Summer and Billy entering a club suite for poker. That would look awfully scandalous to anyone out of the loop!

Once all this blows up, Phyllis will lash out and begin making shocking accusations. She could rip into both Summer and Billy for hitting the sheets. They might spill the whole story, but Phyllis would still be furious over their hush-hush gambling team.

Billy and Summer may be feeling awfully low at that point. Will they turn to each other for comfort? Will Phyllis’ false cheating suspicions bring about a real cheating storyline? The Young and the Restless spoilers say some stunning twists are ahead, so we’ll give you updates as other Y&R news comes in. Stick with the CBS soap and don’t forget to check CDL often for the latest Young and the Restless spoilers, updates, and news.