The Young and the Restless Spoilers: Phyllis Suffers Big From Summer and Billy Hookup – Turns To Nick For Loving Comfort

BY hellodrdavis on October 29, 2018 | Comments: one comment
Related : Soap Opera, Spoiler, Television, The Young and the Restless 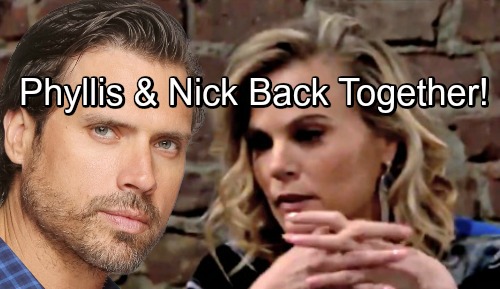 The Young and the Restless spoilers tease that Phyllis (Gina Tognoni) will have some tough times ahead. She likes to put on a strong front and make it seem like nothing’s bothering her, but Billy’s (Jason Thompson) night with Summer (Hunter King) will really get under her skin. And it looks like time won’t necessarily heal this wound.

Y&R spoilers say that Phyllis will continue to have psychological difficulties related to Summer and Billy’s hookup (just like many Y&R fans). She just won’t be able to get it out of her head, and it will really sting that Billy used her own daughter to hurt her in such a vile way. Sure, she and Summer are back on decent terms, but whole thing will just bother Phyllis beyond words.

Phyllis will need a distraction, and it looks like she’ll find it in a familiar person…Nick (Joshua Morrow). Phyllis will find comfort with Nick, and it makes perfect sense that these two would turn to each other at this time. Nick’s having zero success wooing Sharon (Sharon Case) back, and neither Nick or Sharon can seem to find anyone who understands each other so well.

The two will probably start out as sound boards for each other, as Phyllis struggles with the Summer/Billy hookup and Nick struggles with repeated rejections from Sharon. But it looks like over time, things will heat up between the two of them again.

According to Y&R spoilers, there will be “playful, sexy, dangerous, and undeniable heat” between Nick and Phyllis. Could we be looking at a Nick and Phyllis pairing in the future, or will this just be a temporary thing to help them get through their personal struggles?

Are you looking forward to seeing Nick and Phyllis together again? Stay tuned to the CBS soap and don’t forget to check CDL often for the latest Young and the Restless spoilers, updates, and news.