The Young and the Restless Spoilers: Phyllis’ World Destroyed by Secrets and Summer – Jack Waiting for a Comforting Reunion 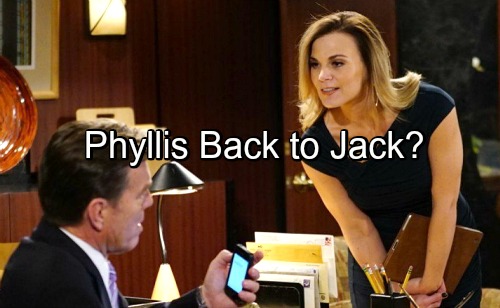 The Young and the Restless (Y&R) spoilers tease that one mistake will cause a massive chain reaction. In fact, the first dominoes have already fallen. Nick (Joshua Morrow) and Phyllis (Gina Tognoni) really shouldn’t have hooked up, but they were technically unattached at the time. Of course, their respective love interests won’t see it that way!

Phyllis and Nick can think whatever they want, but this is definitely a betrayal. They knew good and well they intended on reuniting with Billy (Jason Thompson) and Sharon (Sharon Case) – at least if possible. These two just found an excuse to bang and ran with it.

Nevertheless, they might’ve gotten away with their actions if Nick hadn’t left his clothes in plain sight. That blunder set off a firestorm of consequences. Once Kyle (Michael Mealor) saw the evidence, we all knew it was just a matter of time until he told Summer (Hunter King).

Now Summer knows about the one-night stand, which means it won’t be long until Billy learns the truth. That’ll lead to questions about who Phyllis actually hooked up with. Billy will probably assume it was an ex. After all, Phyllis has been spending plenty of time around former flames lately. There aren’t that many options in Genoa City, so this shouldn’t be tough for Billy to figure out.

Summer may even learn it was Nick and share that info with Billy. It would add to his rage and boost her chances of getting him in the sack. As the secret spreads, it’ll be impossible to keep Sharon out of the loop. This could destroy Nick and Sharon’s romance as well, so Phyllis is sure to feel pretty low.

We’re looking at three destroyed relationships here. “Philly” and “Shick” will definitely be left in ruins. Even if Phyllis manages to make amends later, things will look hopeless initially. Phyllis’ relationship with Summer will also be demolished. They didn’t have a great one anyway, but it’ll still sting if Summer succeeds in bedding Billy.

Phyllis may wash her hands of her manipulative daughter for now and cry over what she’s lost with Billy. She’ll hate that she played a role in Nick and Sharon’s suffering, too. Naturally, Phyllis will need some comfort. The Young and the Restless spoilers say Jack may step up to the plate!

Jack has been supporting Phyllis as a friend lately, but his desires could be creeping back in. Is Y&R planning a “Phack” reunion? They could at least go there for a while. The Young and the Restless has to keep pumping out material, so exploring Jack and Phyllis again is a great option. Billy and Phyllis have oodles of chemistry, but they can’t just have sex every day. That’s not a story!

Phyllis might lean on Jack and let herself head back into romantic territory. Will it work out or just drive her back toward Billy eventually? Will Jack set himself up for heartache? We’ll give you updates as other Y&R news comes in. Stay tuned to the CBS soap and don’t forget to check CDL often for the latest Young and the Restless spoilers, updates, and news.