The Young and the Restless Spoilers: Pregnant Hilary Forced to Take Paternity Test – Lily Pulls Off a Shocking Switch

BY Kinsley Goldman on April 18, 2018 | Comments: one comment
Related : Soap Opera, Spoiler, Television, The Young and the Restless 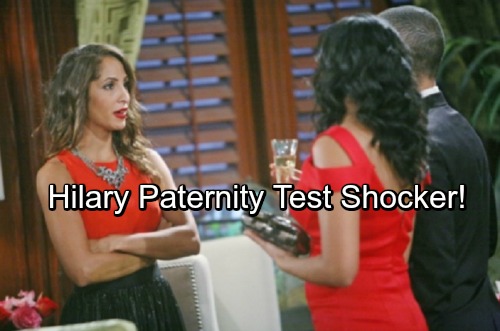 The Young and the Restless (Y&R) spoilers tease that Neil (Kristoff St. John) will worry about the threat Hilary (Mishael Morgan) poses. Devon (Bryton James) agreed to have a baby with Hilary (Mishael Morgan), but backed out of it after a huge fight. If that was all it going to take to derail their plans, these two never should’ve made a deal to raise a child!

Nevertheless, it may be too late to put the agreement behind them. Hilary recently fainted, so she could be pregnant with Devon’s kid. That’s usually how soaps confirm the news! If Hilary is indeed expecting, she’ll undoubtedly use it to push Simone (Shanica Knowles) out of the picture. Hilary would love the chance to gloat and pull Devon closer through their baby.

Of course, Neil has known Hilary long enough to suspect deception. The same goes for Lily (Christel Khalil). They may advise Devon to get a paternity test to be on the safe side. Devon might argue that Hilary was only interested in making a baby with him, but Neil and Lily’s doubts could remain. They could push Devon to get confirmation along with peace of mind.

Y&R fans know Lily was determined to stop Hilary and Devon’s baby plan. She sabotaged Hilary’s insemination appointment multiple times and that led to “Hevon’s” sexy attempts. Still, Lily may not be ready to throw in the towel. Desperate people do desperate things, so we should all expect some trouble.

It’s possible that Hilary had sex with someone else off screen or was inseminated with another donor’s sperm. However, The Young and the Restless spoilers say Hilary and Devon will reunite at the end of this lengthy journey. It makes more sense to give them a happy family, complete with a biological child they can dote on.

In that case, how can Y&R rev up the drama? Perhaps a little paternity switcheroo is in order. Lily might demand a DNA test just so she can change the results. Hilary could defend herself and argue that she didn’t sleep with anyone other than Devon, but he may not believe her. Devon might think Hilary simply manipulated him as usual.